“If the performance sucks, it is 100% your fault, divided by the number of people here.”

So the audience was informed toward the end of #txtshow (on the internet), which I experienced last night via Zoom, the suddenly-nearly-ubiquitous platform that allowed me to leap time-zones and be a part of the Colorado premiere (as part of Denver Fringe Festival) of this work that is billed as “a completely interactive two screen performance.”

Here’s how it works: for forty-five minutes, the audience (who have joined the Zoom meeting with video and audio activated) submit text that is then spontaneously performed by a man (Brian Feldman) sitting (for the most part) behind a desk. I suppose this unusual script-creation arrangement could fall under the heading of a “texted text.”

The source of any particular line is concealed. Though we see the faces of and hear reactions from our comrade audience-members, we don’t know who among the group is supplying which lines; or, at least, we can only guess.

Feldman (“one of North America’s premiere presenters of experimental time-based art”) has been creating unique, unusual, thought-provoking, envelope-pushing performances like this for nearly twenty years now.

Some years ago, as part of Capital Fringe, he came over to my place and washed my dishes before performing, without preparation, a monologue of my choice. That event was Dishwasher and his p.r. material informs us that it’s been seen across the U.S. and India.

Feldman is Washington-based (indeed he was, we were told, mere blocks from the White House during last night’s performance) but his work is frequently seen all over the place on the festival circuit.

Suffice it to say that, in this horrible period during which live performance has been suspended and the lively arts are experimenting with alternative ways in which to engage the audience and remain relevant, #txtshow (on the internet) is an offering that embraces the imposed limitations of the moment. In a funny way, it feels as if it’s an organic response to the lockdown, as opposed to being a stop-gap adjustment — this even though Feldman had been doing a pre-pandemic iteration (#txtshow) for gathered audiences. 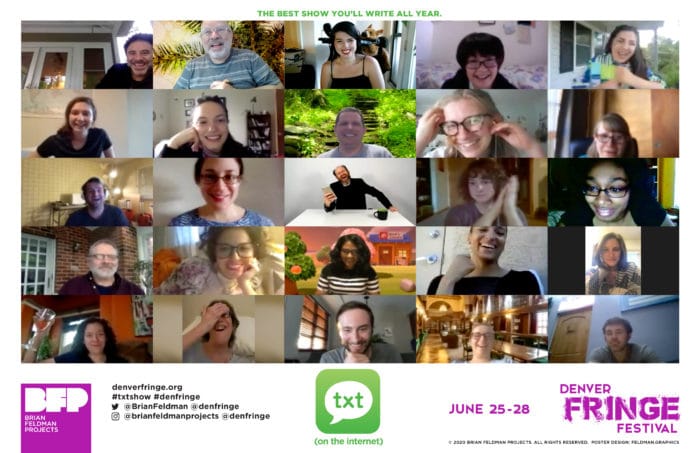 Suffice it also to say that this is the sort of experience that resists formal criticism in favor of mere description. After all, the performance that I took in last night will be similar to another in structure, but will differ entirely in content.

Which brings us back to the line cited at the beginning of the article: what also makes this so unusual is that the quality of the experience will depend as much on each specific audience and each varying text as it will on Feldman and his capacity to engagingly animate each evening’s words.

Whether or not any cohering themes or motifs present themselves to a viewer could also be a variable thing. Some did to me, and those thru-lines revolved as much around the concept as around any specifics of the night.

What was cool was how the compilation of seemingly random thoughts and expressions became a kind of distillation of the social media experience.

As when reading a string of responses to a post, each individual comment might be thoroughly unconnected to its immediate predecessor, even if triggered by the same or a similar impulse. Repetitiveness jockeys with non-sequitur, cleverness with snarkiness, borderline aggression with cheeky playfulness. One interacts with strangers about whom one knows little or nothing, beyond a name and/or a face (intentionally obscured, in the case of one viewer last night).

Feldman, with long graying beard, looked older than when he cleaned my kitchen, and he gives off a downtown Manhattan vibe. He provides the most engaging aspect to the piece as he displays his practiced skills at sizing up unfamiliar material quickly and committing to a plan of attack toward each submission.

I find Feldman’s devotion to non-traditional experiences extremely admirable. If his pieces don’t reach the heights of that master of the unconventional Andy Kaufman (he whose stand-up shows could end with buses taking his audience on funky field trips), he stands firmly in that (non)tradition.

If #txtshow (on the internet) resists traditional criticism because of its unpredictable nature, it provides a compensating opportunity: a critic can, rather than catalog their opinion of existing choices, actually mold the future performances by suggesting to audiences in advance what they should or should not do.

So, dear reader, when you take in #txtshow (on the internet), I suggest you make your submissions as varied as you can, and avoid repeatedly returning to previous subjects. Last night, there was, to my mind, an inordinate amount of reference to a particular movie franchise (which quickly wore out its welcome for me) and repeated references to names which meant nothing to me but apparently meant something to others.

But, wait: as I stated at the outset, the blame for any content disappointment must be shared by me. I was a part of the experience and control of the path it took resided with my keyboard as much as with anyone else’s.

Sure, I’m not the most tech-savvy of audience members. Getting on the Zoom meeting successfully, dutifully changing my name to “Anonymous” and making sure my video and audio were on (and, I shamefully admit, my audio was muted longer than I realized), that was the limit of my virtual capacities. Figuring out how to text text was a bridge further than I was capable of navigating.

Having admitted to that failure, I am reluctant to place too harsh a judgement on my fellows who were able to send lines for Feldman to speak. So, I resist the imperative to assign a star rating to what I saw yesternight.

What I can tell you is that Brian Feldman and Denver Fringe Festival are providing you with a no-limits opportunity to make the remaining three performances of #txtshow (on the internet) a five-star show. Are you up to/up for the challenge?

#txtshow (on the internet). Created and Performed by Brian Feldman. Reviewed by Christopher Henley.