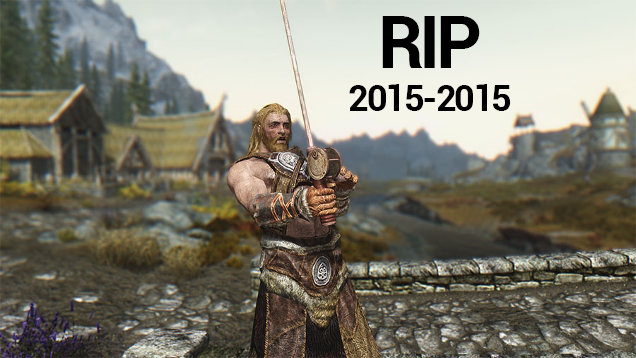 Perhaps you’ve heard a thing or two about “Valve” and “Skyrim” and “mods” recently. What does it all mean? The company that built the world’s most successful video game marketplace started an app store that pays people to remix virtual worlds—and 100,000 angry internet denizens just shot down that idea.

In case you’re not familiar, a mod is a piece of software that modifies a video game, adding content that the original developers never intended—anything from a really cool sword, or a sexy new character outfit, to an entirely new virtual world, even an entirely new game, built on top of the same basic software. Some of the most popular video games ever made started out as mods. Ever heard of Counter-Strike or DOTA or DayZ?

So on Thursday, Valve (the company behind Steam, and Half-Life, and Counter-Strike, and Portal, and Left 4 Dead) announced a partnership with Bethesda (which makes popular fantasy game Skyrim) to let modders sell their Skyrim mods on Steam, giving modders 25% of the profit.

The result: OUTRAGE. Over 133,000 signatures on a petition to shut it down. Valve’s beloved co-founder Gabe Newell obliterated when he tried to explain the idea on Reddit. Millions of dollars of lost productivity’s worth of angry email sent to Valve employees, by Newell’s estimate.

What was so wrong with the idea? According to the modders, just about everything. They felt that a measly 25% wasn’t fair. They felt that Bethesda shouldn’t get 45% of the profits, not when the mods were a big reason why people were buying new copies of Skyrim in the first place. They saw that paid mods were dividing their free, peaceful, collaborative community. Modders had already started stealing code from other modders (perhaps unwittingly) in an attempt to cash in. They worried that without any sort of quality control, the market would get flooded with shitty, worthless virtual items that would tarnish the community’s name.

Today, just a couple of hours ago, Valve and Bethesda relented. Paid mods are no more. “We’ve done this because it’s clear we didn’t understand exactly what we were doing,” wrote Valve.

It sure seems so. But personally, I’m pretty disappointed. I love mods, and I’m happy that the modding community will be able to keep creating them on their own terms, but the right terms could have meant something even greater.

Imagine if the company that built the most successful video game store offered a platform where people could collaboratively build virtual worlds, and make a living from their contributions. Imagine the lengths they’d go, the amazing things they’d build, for that reward. I’d hate to think a poorly thought-out scheme could completely destroy that idea.