You are here: Home / Internet / The Internet of Things: Where We Are, and Where We’re Headed – Association of Equipment Manufacturers (AEM) 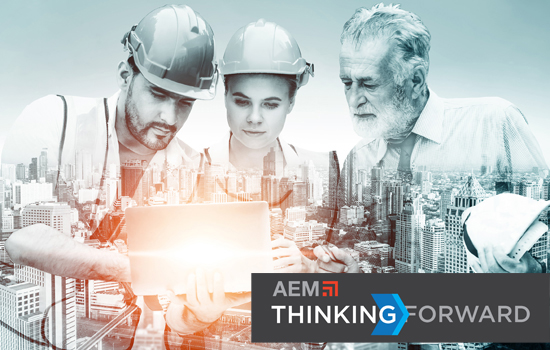 Evolution or revolution, we’re on a journey that will surely affect…everything.

Nowadays, a frequent question is, “When will the Internet of Things materially impact me or my organization?” Given the enormous amount of hype associated with the IoT, the question is reasonable. Fortunately, history offers us a guide to how this is likely to play out. Let’s quickly look at the factors that have typically brought new technologies into common use:

1. Doing something that you were already doing, but better/faster/cheaper. In business and government operations, this is almost always the case (e.g. stock trading or travel booking, or going way back, automobiles vs. horses-and-carriages). Quirky exceptions include transitioning from a cheap pen, checkbook and calculator into using relatively costly computers and software to do accounting, but over time the benefits overtook concerns about the initial expense. Keep that in mind as we apply this to the burgeoning IoT.

2. Doing something that you couldn’t do until a new technology showed up. An amazing number of businesses have been built upon GPS’ existence. Like the Internet itself, GPS is a child of the military. Owing to a few “tweaks” which were mostly in the realm of chipset design and the opening of the system to wide usage, GPS-based applications have become so pervasive that it’s hard to imagine how we navigated prior to its availability. Many applications are surprising and bear directly on the IoT.

3. Innovating now that enough of a new technology is deployed to create new opportunities. By far my favorite example goes like this: “Hey, let’s build a fun animated game that runs on an amazing handheld device with great graphics and connectivity which a huge portion of the world population needs to buy, and requiring the construction of a multi-trillion-dollar global wireless telecommunications network.”

Twenty years ago that would have sounded impossible. But shift forward in time until all of those elements are in place and part of daily functioning, and it’s Angry Birds for everyone. You could easily make similar comparisons using social media, electric cars and big box stores (try to create Walmart at its current size without intermodal containerized shipping). Or Netflix. Or Amazon. All of them stand on top of enormous investments in equipment and infrastructure.

Okay, let’s now apply these to where we are in the evolution of the IoT market.

Better/faster/cheaper. The introduction of network-connected sensors isn’t at all new — what’s advanced is the ability to link them via TCP/IP over wired and wireless infrastructure that was initially built for human communication. Although devices that can be considered IoT are in fact “things” connected via the “Internet” they’re not there for human access, as with laptops and smartphones.

Instead they’re transmitting digital representations of the physical world, i.e. sensor data. A great example of how this enables better/faster/cheaper is in the electric power industry — for years, grid operators have sent out personnel in trucks or helicopters to inspect high voltage lines, often at their peril. This was both time-consuming and costly. Now, many are employing sensors that can beam telemetry almost instantaneously to monitoring centers, at tremendous savings.

Something that you couldn’t do before. Unless you happened to have a nurse following you around at all hours, it’s unlikely that you had continual sampling of your heartrate and other physiological factors prior to the introduction of wearable monitors. The advent of these and other devices that leverage the ever-decreasing cost of processing power and connectivity for electronics, has given us the consumer side of the IoT. There are many examples in the commercial world as well, such as “smart tags” and “Uber for trucking,” which leverage Moore’s Law in ways not previously feasible.

Innovating. This is definitely the most interesting, even fun, to contemplate. Future tense, because we aren’t there yet. In a way, one might call this the “search for the killer app” which rarely happens overnight. The most visible are those that tie together several different key technologies to produce, for example, Uber. You couldn’t have done Uber at scale until the majority of people had smartphones with GPS receivers built in, the cost of mobile data got close to zero and low cost cloud-based servers became viable.

The IoT isn’t quite there yet.

What makes it challenging to guess about is the sheer range of IoT devices and systems — the panoply includes sensors that you swallow, automated cargo ships and farms or factories based entirely on robots.

With all of this taken into account, it’s reasonable to say that the IoT is primarily in the “better/faster/cheaper” phase, and in some aspects the “something you couldn’t do before” phase. Innovating is starting to happen, here are a few early examples:

Energy. We’re seeing home power generation and storage become viable. Since virtually all of the hardware and systems implementing these are new, they’re naturally bristling with microprocessors, sensors and built-in connectivity. This has triggered the emergence of startups and government-level initiatives to capture the data and utilize it for a variety of purposes.

Smart Cities. Although not everyone has the same definition of “smart cities,” it surely means that the IoT is becoming pervasive within the municipal environment. One clever idea is to capture the movement of cellphones as a proxy for human activity, and use that (anonymized) data for applications that were previously not workable.

Intelligent Transportation. The impetus towards self-piloting vehicles is the obvious evolutionary step here. As per historical examples, to have cars, trucks and buses drive themselves require a great number of information technology, sensor and infrastructural technologies to come together. Clever linkages of sensor data streams that haven’t been leveraged before in combination, are aiding in the evolution.

Where does this leave us?

Without a doubt, the IoT is becoming embedded within our personal and business lives, sometimes in a highly visible way, sometimes behind the scenes. Best bets are to monitor adoption of the underlying technologies — and follow the entities who are driving them — as guides to where you and your organization can most benefit.

The IoT’s influence is definitely growing everywhere — come see it in action at the Tech Experience during CONEXPO-CON/AGG 2020.

David Knight leads Terbine, the first commercial exchange for data encompassing the physical world, often called the Internet of Things. A serial entrepreneur, his background is in core technologies including multi-spectral sensing and communications, digital audio, messaging, enterprise software and distributed systems. Knight will conduct an education session entitled “More Data Than Ever Before – How the machines and infrastructure of our world are the new Big Data creators” at CONEXPO-CON/AGG 2020. For more information, visit https://www.conexpoconagg.com/visit/education/.