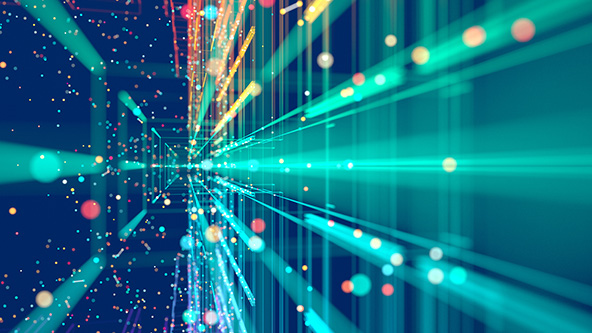 The 2020 presidential election hasn’t yet come to a definitive conclusion, due in part to the power of the internet to enable and reinforce an alternate reality in which widespread voter fraud—despite no material evidence or even credible suspicion by serious observers—robbed President Donald Trump of reelection.

These developments are typical of the internet era. All too often causal factors that have nothing to do with technology collide with digital communication to accelerate and amplify distrust and confusion. We are where we are in mid-November because the president himself is unwilling to respect the most basic political and cultural conventions around the transition of power. Yet it’s impossible to quell the anxiety that the internet—what it enables and how people use it—is playing a central role in translating the president’s intransigence into a credible threat to democracy. The ability to reach a large and dedicated audience directly through social media has been a signature feature of President Trump’s governing style, and the predilection for that audience to ravenously feed its motivated reasoning is facilitated by the internet.

Social media is, in this respect, not unlike nuclear weapons: They didn’t create malevolence, but they vastly raised the stakes.

What we must recognize, however, is that the power of the internet to destabilize our democracy and society has simply been thrown into relief by the election. These deleterious effects had already reached troubling levels, even before the confusion of the past few months. For philanthropy and civil society, the task is to develop clearer knowledge of the endemic challenges the internet now poses for our society, of which the election is merely the latest and most vivid symptom.

Fortunately, history provides parallels that can inspire us toward an effective, concrete response.

In 1910, philanthropist John D. Rockefeller contributed $1 million—about $25 million in today’s dollars—to establish the Rockefeller Sanitary Commission for the Eradication of Hookworm Disease. The commission sought to address the vast prevalence of hookworm across the American South. At its peak, the disease was estimated to have infected 40 percent of the region’s population, engulfing them in a quiet crisis. Because the disease is notoriously difficult to diagnose and the symptoms manifest as a low burn, it can easily go undetected. Victims are plagued by pain and weight loss, and sometimes become anemic. Most vulnerable are children, who can suffer from long-term impairments to cognition and learning.

In fewer than five years, the Rockefeller Sanitary Commission sparked efforts that substantially reduced the incidence of the disease. The approach was broad. The commission enabled the wide distribution of treatments across the South, and launched a public education campaign aimed at what amounted to the “front lines”: doctors, teachers, and families. The commission also emphasized non-medical interventions, helping communities understand the importance of proper sanitation, and advising on the construction of outhouses and other facilities.

The leaders of the commission recognized a distinction between medicine and public health as separate domains of knowledge. As Commissioner Wickliffe Rose observed, “The science of protection is quite distinct from the science of cure.” Though of course related, the latter concerns treating an individual; the former focuses on the health of an entire population.

This distinction is coming home to us in the age of COVID-19. Medical care can help alleviate the symptoms of the disease and, where possible, prevent unnecessary death. But public health measures—such as masks, handwashing, and social distancing—will be essential to managing the epidemic until a vaccine arrives. Even then, we’ll face the challenge of ensuring that the vaccine is distributed and administered—a public health problem, not a medical one.

Creating a New Field of Knowledge: A Public Health Paradigm for the Internet

Public health problems 100 years ago were exacerbated by industrial and social change. As urbanization took hold, southern cities had developed neither the physical infrastructure (such as proper public sanitation facilities) nor the social infrastructure (such as public education and preventative treatment) to inhibit the spread of diseases like hookworm. Industrial organization changed the world, but our public systems had not yet caught up.

The internet revolution is no less profound. While major technology companies may deliver their services, manage their workforces, and report their results using the same tools as 20th-century businesses, they operate in a way fundamentally different from the manufacturing enterprises and mindset that dominated the last century. Where the old world was organized around achieving greater efficiency and reach of production, the internet is about the reach of networks. As a result, leading internet companies thrive not on raw materials, but on raw data about us and our behavior that can help them expand the size of their networks and drive an increasing volume of transactions. Reliant on complex, software-driven artificial intelligence systems, these companies make money when more of us do more things through the networks they control—whether it’s uploading a picture, hitting a “like” button, renting someone’s apartment, or running a search.

These challenges are today’s equivalent of hookworm, a pathology whose presence signals a pace of change beyond our current ability to manage its consequences. The halting, inconsistent responses of the major internet and social media companies during the latter stages of the election indicate just how difficult it is to get ahead of the devious ways that malicious actors can exploit these networks.

In the face of this asymmetry between the speed of harm and the speed of prevention, we lack the knowledge and the know-how to formulate a sensible, society-wide response. As Harvard law professor and early internet scholar Jonathan Zittrain has noted, thinking about the internet through a public health paradigm is helpful because such a view is “much more geared around risks and benefits,” and can “emphasize the interlinkages among us … and the need for systemic intervention and shaping to prevent harm from accruing, regardless of who might be to blame for first injecting harm into the system.” Public health works hard to identify patient zero in an outbreak. This is not to find and punish him, but to understand the source of a disease and the conditions that enable its transmission, and thus manage its spread and reform our systems to prevent it (or a similar disease) in the future.

As with public health, our ability to curb the negative effects of the internet will require that we assess the costs and benefits of digital networks with respect to their impact in society. This approach can move us away from questions like, “Do I have the right to post false information?” to questions like, “Do we want inaccurate information available online? How much inaccurate information are we willing to tolerate?” These questions can guide us toward practices—regulatory, within corporations, among our social institutions, and even individually—that help strike a balance we choose between the benefit and the harm of a digital world. Such practices may include targeting direct practices by companies that exploit, exacerbate, or trigger harmful patterns of behavior or yield unintended negative effects. It may also involve our own social behavior in a digital, networked world. The likelihood is both have a role to play.

Developing a framework better attuned to the endemic nature of the challenges posed by the internet will help us move forward. The technology is here to stay, and so we will need to orient our responses—individual and collective—toward the management of it and the mitigation of harm, not their wholesale elimination.

The insight that public health is a distinct domain of knowledge also led several Rockefeller commissioners to treat public health as a new and independent profession. Together, they developed the blueprint for a new school of public health that would exist independently from the medical school and would train an emerging generation in this new discipline. Their vision directly resulted in the Johns Hopkins School of Hygiene and Public Health, which opened its doors in 1918, and Harvard and Columbia quickly followed with schools of their own.

The internet’s public health moment demands a similar focus on the cultivation of a distinct field of research, both to expand knowledge and to train experts who can help accommodate this technology without ceding our democracy. This is an especially acute need given the technical and philosophical conditions a public health paradigm for the internet will need to address and, in some cases, refashion.

First, the technical demands of analyzing digital networks and their effects are rigorous and new. Some of these demands have to do with the computing power and engineering acumen to observe what’s happening on social media or in online commerce. Others have to do with the big data sciences and methodologies that allow scholars, companies, and regulators to interpret these phenomena. While doctors in 1903 were trained to recognize hookworm, they wouldn’t have had medical-school training in the statistical techniques required to estimate hookworm’s prevalence in a population or to model its spread. Nor would they have had technical knowledge on how to implement a sanitation system for a major city. Those competencies are in a way distinct from medicine, yet they need to consider medical questions about the nature of a disease. Today’s internet public health challenges are similar, in that they combine old tools like law, ethics, sociology, and political science with new tools like computer science, engineering, network design and analysis, and complex data and mathematical sciences.

Second, most of this technical talent resides in a relatively small number of companies. The top technology firms, and the private-sector technology industry generally, dominate the acquisition of talent. This directly inhibits public clarity, because the technical knowledge necessary to understand digital technology and its effects stays inside companies, rather than out in the open.

Third, there is a cultural issue at play. Many technologists, and engineers in particular, come from a worldview that is techno-utopian and techno-deterministic. They are techno-utopian in that they see every problem as computationally soluble—even those technology causes. And they are techno-deterministic in that they simply assume that technology will advance toward greater use, adoption, and ubiquity—whether we like it or not.

A public health infrastructure for the internet would put the public interest first, and treat technology and the industries that support it as constrained by our social values and priorities.

The following could help grow this field exponentially:

The demand for this new field is real, as is its potential impact. An independent assessment of the Knight Foundation’s initial research investments found an insatiable appetite for clearer knowledge and evidence—among journalists, policy makers, and the public—to inform how we manage the internet for public benefit. Due in large part to the volume of online misinformation around COVID-19 and the 2020 presidential election, the handful of institutions we supported produced hundreds of papers, thousands of citations and media mentions, and dozens of appearances before policymaking bodies—all in 2020 alone.

Much of the conversation in the coming months and years will be about how to rebuild, renew, and reinvent the public and private institutions that sustain a thriving democracy. A critical part of that conversation must focus on the new knowledge we need to ensure that democracy can survive the internet.

A century ago, the public health field implicitly recognized that urbanization and industrialization were with us to stay, and sought to provide the skills and tools to accommodate those changes within democracy’s evolution. The digital revolution is demanding the same tenacity and creativity of us today.