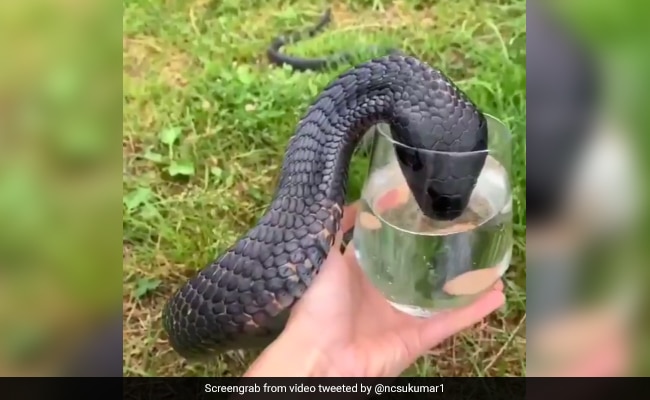 A cobra sipping water from a glass a man is holding.

A video of a black cobra snake sipping water from a glass held by a man is going viral on social media. The cobra is among the most venomous species of snake on the planet and are native of Southeast Asia. The king cobra – longest in the cobra species – is very commonly found in India.

Monkey and ducklings are eating watermelon and here u are watching the king cobra actually drinking water from a glass held in the hand. They too have to be hydrated then n there.But they don’t open the mouth to drink water there is a small nostrils through which they suck water pic.twitter.com/6g2nZUUXke

The video of the venomous snake was posted by a person in response to IFS officer Susanta Nanda’s Twitter post, which showed a monkey and few ducklings sharing watermelon. “Love to share,” Mr Nanda said in his tweet.

A user named ncsukumar then responded with a video of a cobra drinking water. He captions the video as,
“Monkey and ducklings are eating watermelon and here u are watching the king cobra actually drinking water from a glass held in the hand. They too have to be hydrated then n there. But they don’t open the mouth to drink water there is a small nostril through which they suck water.”

The post is old, with the user replying to Ms Nanda in August last year. But it is again going viral since it’s the summer season and very few people actually hope to see a thirsty cobra snake.

Though it’s natural for every animal to drink water to keep itself cool during extreme heat, this particular video has sent chills down the spine of internet users.

“Unbelievable, looks quite huge, looking at the tail behind,” a user wrote in the comment.

“Need lot of courage to do this,” while another commented about the man who is holding the cup.

With an average length of 3.18 to 4 metres (10.4 to 13.1 ft) and a maximum length of 5.85 metres, the king cobra is the world’s longest venomous snake (19.2 ft). The colour of its skin varies according on the habitat, ranging from black with white streaks to a uniform brownish grey.

It mostly eats other snakes, including its own kind. It rarely hunts other vertebrates, such as rodents and lizards, unlike other snakes.