You are here: Home / Internet / Tribes across US push for better internet access – INQUIRER.net 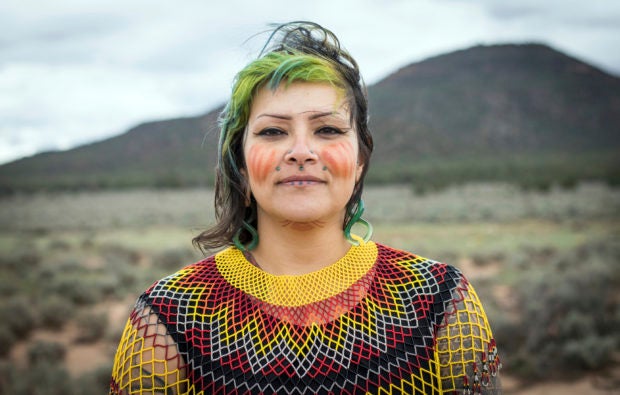 This undated photo provided by Amy Martin shows Ophelia Watahomigie-Corliss, a member of the Havasupai Tribal Council, at Red Butte, a site that the Havasupai consider sacred about 15 miles south of Tusayan, Arizona. AP

FLAGSTAFF, Arizona — In a remote, roadless Arizona canyon that is home to a small Native American tribe, there’s a natural skepticism toward the internet.

The telemedicine equipment that health care officials promised would work gathers dust. School children who have online homework struggle to get online. And streaming a web-based conference or taking classes remotely? Well, “that’s a lot of luck you’d have to get,” said Ophelia Watahomigie-Corliss, who sits on the Havasupai Tribal Council.

Things started to change after a small company approached the tribe with a plan to broaden coverage for educational use. It’s now using the experience to help push the federal government to give tribes priority for broadband spectrum largely unassigned across the western United States.

The Federal Communications Commission has not issued any new permanent licenses for the Educational Broadband Services spectrum in more than 20 years. It asked the public a year ago to weigh in on possible changes to the licensing system to better define geographic areas, build in flexibility, create priorities for tribes and educational institutions, and possibly auction off the 2.5 GHz-band spectrum. It’s not clear when the FCC will act.

The agency estimates that about one-third of the people living on tribal lands don’t have access to high-speed internet, but others say the figure is twice as high. That’s partly because homes on remote reservations are spread far apart.

And tribes say large telecommunications companies are unwilling to expand to tribal lands because of the cost.

The internet on the Havasupai reservation has been a mixed bag. Tribal employees could sign on to their email and do internet searches but not much else. Public access for 450 residents was centered on the community building in the village of Supai. Thousands of tourists who trek 10 miles (16 kilometers) down a winding trail to see the reservation’s famed blue-green waterfalls have no internet access at their campsites away from the village.

The tribe began working with a company called MuralNet in 2017 to get teachers and students better access. They successfully sought temporary authority from the FCC to use the Educational Broadband Services spectrum — a sort of channel of electromagnetic waves — that wasn’t being used. Flagstaff-based Niles Radio Communications helped build the network.

Jacqueline Siyuja now has a wireless router to take online classes for her job at the tribe’s Head Start program. A few years ago, she and her colleagues had to fly out of the canyon and drive more than two hours to a community college in Flagstaff for classes. She also had to take her young daughter with her.

“It was really challenging for us,” she said.

Jordan Manakaja eventually wants to get her bachelor’s degree and become a therapist in the community. She prefers online classes at home where she can interact with an instructor.

“We have the opportunity to wind down and get comfortable before we’re in a classroom,” she said. “That was more beneficial to us mentally.”

The tribe won’t know whether it can make other plans for the spectrum, like using telemedicine, transmitting medical records electronically or starting an online high school, until the FCC decides whether to grant the tribe’s application for a permanent license.

Nearly 2,190 licenses that generally cover a 35-mile radius have been granted to 1,300 licensees, according to the FCC.

The agency has asked for public comment on realigning the boundaries of the licenses, eliminating the educational use requirement, and allowing tribes, current licensees or new educational entities to access unassigned spectrum before a possible auction.

Despite its name, the spectrum isn’t used solely for educational purposes. Licensees can lease it to commercial providers. Sprint is among the largest users.

Tribes in Oklahoma, Wisconsin, Washington, Idaho and others in Arizona also are pressing the FCC for a priority filing window.

On the Havasupai Tribal Council, Watahomigie-Corliss is dubbed the telecommunications member and she’s the youngest at 33. When she presented the project to colleagues, she was well aware of their doubts.

“It was my job to prove to them it could possibly work, and that comes with the territory of so many people trying to make things work at Supai that work on the outside,” she said.