Ukraine’s Armed Forces have announced the development of a chatbot that will transmit information about Russian forces even if they are not connected to the Internet. The official Twitter handle of Ukrainian Armed Forces posted on March 15, “Thanks to caring volunteers-developers, our chatbot got new opportunities! From now on, you can send information about the movement of the enemy even without an Internet connection!” 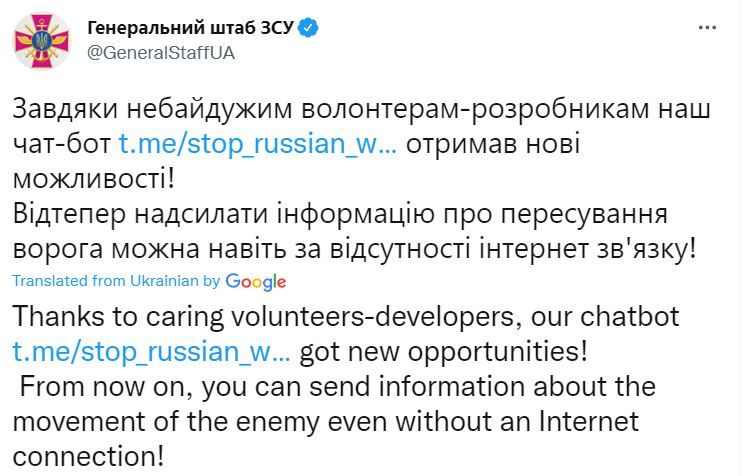 Meanwhile, yesterday the Ukrainian armed forces announced that Russian forces had continued to “conduct systematic combat operations employing bomber planes in order to destroy Ukraine’s military and civilian facilities.” Russian forces maintained their efforts to surround the city of Mykolaiv, which is viewed as a crucial gateway to the large south-western city of Odessa, amid severe fighting in the south, according to the armed forces.

The armed forces in a statement, cliamed that, “The occupiers use high-powered ammunition and disordered strikes on civilians. Such actions are classified by the International Humanitarian Law as a war crime.”

Russian soldiers are attempting to cross the Irpin River and build a foothold near the settlements of Bucha and Irpin, two Kyiv suburbs that have seen fierce fighting since the invasion began, according to Ukrainian military forces. Armed Forces further stated that Russian soldiers were reorganising in preparation for a resumption of offensive operations in the direction of Kyiv.

According to the armed forces statement, the Russians were concentrating their efforts in eastern Ukraine on recouping losses suffered in Kharkiv and Izium. Both cities have suffered considerable devastation and civilian casualties. According to the armed forces statement, 77 Russian aircraft, 90 Russian helicopters, and approximately 400 Russian tanks have been destroyed thus far.

In the meantime, Ukraine’s President, Volodymyr Zelenskyy, has said that talks between Ukrainian and Russian officials will begin on Tuesday. In a video message, Zelenskyy stated the Ukrainian delegation did a terrific job at Monday’s meeting. The most recent round of talks, held via video conference on Monday, was the first in a week and involved higher-level officials from both countries. According to Zelenskyy’s adviser, the negotiators came to a “technical halt” after many hours of talks and planned to meet again on Tuesday.