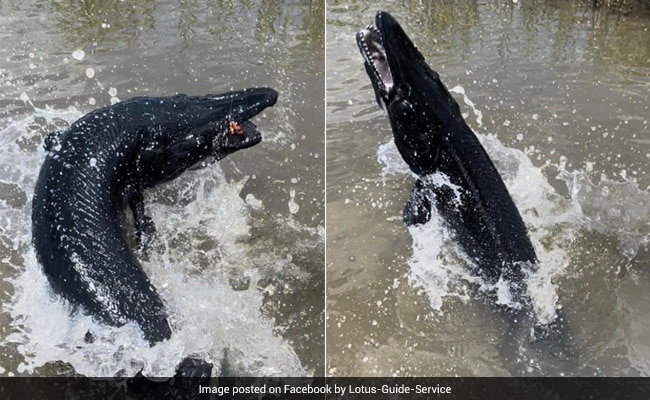 The giant fish are rare and endangered.

US fishermen Justin Jordan and Terrell Maguire recently caught a rarely seen jet-black river beast in southeast Texas. Speaking to Newsweek, Mr Jordan, a fishing guide in Texas, informed that the creature they caught was a “very rare” melanistic alligator gar. He said that the fish was about 5-feet long, although, he added that the species is known to reach “enormous lengths”.

Mr Jordan shared several photos on social media that showed the jet-black creature thrashing around in the water. “Well… me and Terrell found out melanistic gar do exist yesterday..,” he wrote in the caption of the post.

See the photos of the rare creature below:

The pictures show the “scary” creature with its mouth open, displaying a row of large white teeth. Since shared, the images of its bizarre appearance have left social media users perplexed. While some called the beast “freaking scary,” others described it as a “creature from alien”. “TERRIFYING,” wrote third.

Meanwhile, according to Newsweek, alligator gars are the biggest of the gar fish species. They only live in North and Central America and are known for their large size. The giant fish are rare and endangered and usually dark green or olive in colour.

Ones that are all black, such as this one, are even rarer, the media outlet reported. Not much is known about this black species. Scientists haven’t been able to track their population as well, or document their abundance in the Texas river.

The species are harmless to humans but because of their large size, they can put up a fight if caught. Their preferred habitat consists of large, slow rivers, which often become restructured or dredged.