Panasonic Corp. is aiming to introduce a security system it has developed for automakers to prevent cyberattacks amid the launch of more vehicles that offer various services via the internet.

The new system will see software installed in internet-connected cars to detect abnormalities and dedicated teams at Panasonic and the automakers will monitor the cars around the clock, the Japanese electronics conglomerate said.

In late October, Panasonic demonstrated an example of a cyberattack and how it is detected at a mock-up surveillance center set up in Tokyo. Once a demo car in Osaka was hit by an experimental remote attack, the car’s driving wheel quickly turned 180 degrees and a warning beep blared out in Tokyo. 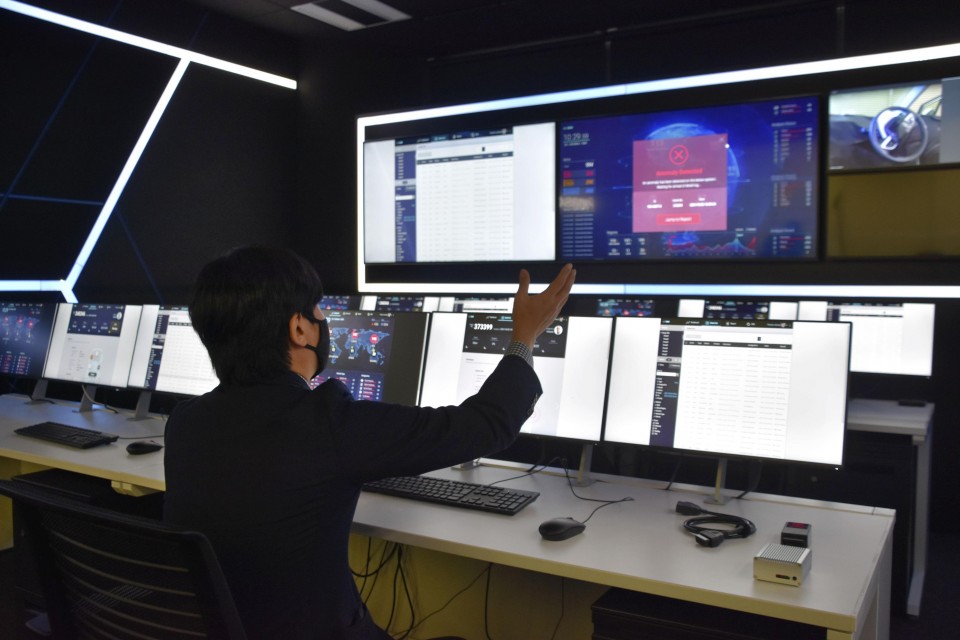 A Panasonic Corp. official talks about the company’s security system to monitor cyberattacks against internet-connected cars at a mock-up surveillance center in Tokyo on Oct. 22, 2021. (Kyodo)

“If the computerized control is taken over during driving, it leads to fatal accidents. Practically, abnormalities need to be detected at a much earlier phase,” a company official said, adding that the company’s system is capable of doing just that.

The teams are expected to cooperate in collecting information and revamping the car system. The installed software can be updated remotely when needed to prevent an attack from outside, Panasonic said.

The surveillance center will be able to manage cars both in Japan and abroad in a unified manner, the company said.

According to research firm Fuji Keizai Group Co., the number of internet-connected cars is expected to increase steadily to account for 80 percent of all passenger cars sold globally in 2035 from 34 percent in 2019.

The Japanese government is also beefing up measures against cyberattacks. Cars with driving control systems that can be updated wirelessly that are to be sold from July next year must undergo screening by the Ministry of Land, Infrastructure, Transport and Tourism.

The evaluation criteria include whether automakers have secured a system to manage cybersecurity and to provide software updates accordingly, the ministry said.

The Panasonic official said the company will work with IT companies and “make this system an industry standard.”