You are here: Home / Technology / Amid widespread tech industry layoffs, some companies are still hiring in a ‘flipped’ labor market – GeekWire

Document engineering startup Docugami has doubled its team to 20 people since raising a $10 million funding round in early February. Jean Paoli, the company’s CEO and co-founder, has met almost none of the new employees in person, neither during the interview process nor since they’ve started in their new roles.

“I’ve thought about it: what do I do the first time I see them in person? How tall is everyone? I have no idea,” said Hartley Riedner, the company’s new head of operations, laughing with Paoli on a video call with GeekWire this week.

Docugami is still hiring, recruiting for a variety of open engineering positions in a job market that has suddenly been turned on its head.

“Unfortunately, it is going to be easier,” Paoli said, lamenting the industry’s broader economic struggles and saying he feels humbled and fortunate to be in a position to hire. “There are a lot of great companies today that are laying off people.”

The startup, based in Kirkland, Wash., is part of a counter-trend in an industry and economy hit hard by the global COVID-19 pandemic. As of today, more than 380 tech startups have cut more than 44,000 jobs since March 11 as they curb expenses and try to survive amid the economic downturn. Larger stalwarts such as Yelp, Lyft, Airbnb, and Uber are also cutting thousands of roles.

Seattle tech startups across various industries are laying off workers as revenue dries up. Cosmetic treatment review platform RealSelf; pet sitting giant Rover; and real estate company Redfin have all cut positions, among other companies. Even non-consumer sectors such as cybersecurity are not immune. Seattle security startup ExtraHop is one example.

One result is an influx of unemployed tech workers searching for new jobs as many companies pull back on hiring plans. Software development openings on jobs site Indeed are down 32.8% compared to last year. Venture capital funding could be headed for a “drought,” further reducing hiring budgets.

The shift in demand to online services, combined with a highly mobile workforce, may help tech weather the crisis better than other industries.

But amidst the economic uncertainty, there are still tech companies of all sizes looking to fill roles. Some of them share common traits, including the good fortune of having raised funding in the weeks or months prior to the downturn. And certain tech sectors are still booming. Telemedicine and cloud computing startups, for example, need help meeting demand due to the outbreak.

Across the tech industry as a whole, job openings actually rose 4.9% from April 13 to April 27, according to employment review and jobs site Glassdoor.

“The shift in demand to online services, combined with a highly mobile workforce, may help tech weather the crisis better than other industries,” wrote Glassdoor senior economist Daniel Zhao. “While the small increase is not enough to offset the total declines over the duration of the crisis, it is a reason for optimism.”

In the meantime, the tech job market has been radically transformed. Companies that are hiring have sudden access to a new pool of high-quality engineers, designers, salespeople, and others who are out of a job. Tech workers who were just laid off have tougher competition and fewer open roles to pick from.

It’s a sudden departure from a tight labor market that fueled intense competition between tech companies vying for scarce talent.

Jeffrey Spector, co-founder of technical remote interview startup Karat, said these companies are “squeezing two or three quarters of hiring into one.” Spector wrote in a blog post, “They are benefiting from the reduced competition: recruiting teams we are talking to are reporting two to three-fold increases in response rates to their outreach via LinkedIn.”

Many healthcare startups are accelerating their roadmaps due to the pandemic. Twistle, which makes it easier for hospitals to communicate with patients, saw huge interest in its COVID-19 assessment technology and is now bringing on up to 10 employees by this summer to help support demand.

A spike in venture capital investment in Pacific Northwest startups last fall is one of the factors driving the hiring in the sector now. For example, Seattle-based on-demand freight network Convoy, which raised $400 million in November, has a long list of open positions. VC and angel investment in the region has cooled off in recent months, largely due to the economic impact of the pandemic, but the decline has not been as sharp in Seattle as in other parts of the country. 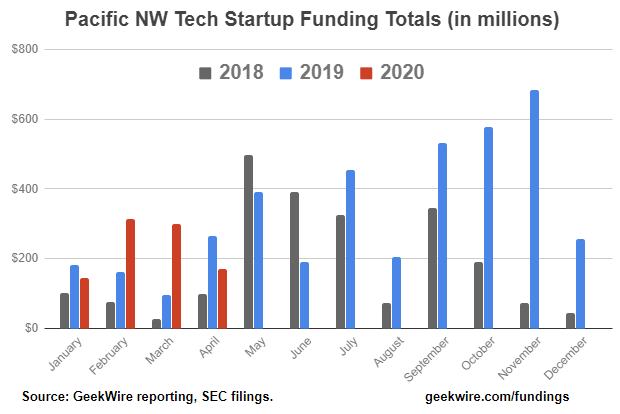 Seattle startup 98point6 raised $43 million earlier this month to help increase development capacity for its virtual healthcare technology. The company has 241 employees and expects to reach 350 people by 2021.

Related: What do the Airbnb, Lyft, and Uber layoffs mean for Seattle engineering outposts?

The global pandemic is also accelerating the shift to other tech-fueled services such as digital remittances. Remitly, which helps people send money overseas, saw customer growth spike 100% from February to March, with a 40% growth in transaction volume. It is looking to fill 25 positions.

Maria Hess, partner at Seattle-based Madrona Venture Labs, said it’s primarily data and security startups that are hiring at its studio. “These companies are early, have raised funding, and have runway to build great products and serve customers,” Hess said.

Silver Lining, a website that helps recently-laid off workers find new roles, has more than 1,000 jobs postings. A majority are technical roles — 68%, compared to 9% for marketing jobs and 7% for sales positions.

There’s an even mix of small and large companies (200-plus employees) hiring on Silver Lining, said Chris Brownridge, the Seattle-based entrepreneur who launched the site earlier this year. The largest industry is software/cloud, followed by healthcare. 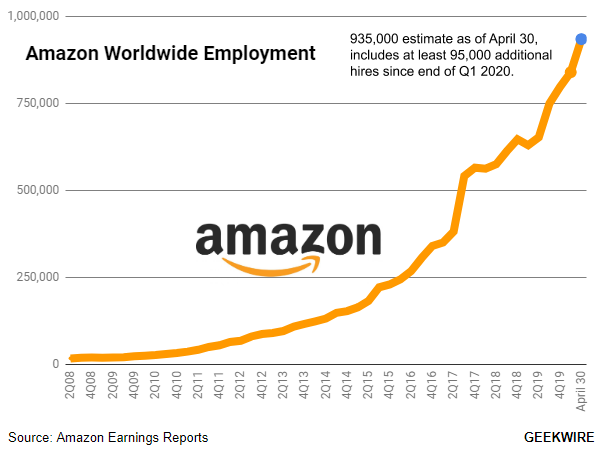 Among the tech giants, Amazon could come out of the pandemic stronger than ever. Millions are relying on the company for everything from grocery delivery to cloud computing. Not only is the Seattle company hiring 175,000 additional warehouse workers, but it has more than 10,000 open software development roles and thousands of other positions available across sales, project management, and more.

Microsoft, the other trillion-dollar behemoth in Seattle, is temporarily pausing recruitment for certain roles. “We continue to seek industry-leading talent in a range of disciplines as we continue to invest in certain strategic areas,” a Microsoft spokesperson said in a statement last month. The company has nearly 3,500 openings worldwide, with about half of those at its Redmond, Wash. headquarters.

Google, which has about 4,500 employees in the Seattle region, said it would “significantly slow down the pace of hiring” this year. Seattle real estate giant Zillow is also freezing hiring plans.

Facebook, with more than 5,000 Seattle-area workers, plans to hire an additional 10,000 people this year.

Tableau, acquired by Salesforce last year, is still hiring, with 345 open roles. Avalara has hired 106 full-time employees since March 1 and is looking to bring on another 164 people.

Other publicly-traded companies with in the Seattle region with available jobs include Impinj, Adaptive Biotechnologies, and F5 Networks, which pledged last week not to make layoffs in its current fiscal year ending in September.

Larger companies with more resources have a leg up over smaller startups in terms of dealing with hiring in a crisis. Early-stage startups might also find it more difficult to recruit in the midst of a global pandemic, given the state of the economy.

“Candidates will look more closely at the actual product and product market fit than they would have six months ago,” Swerland said.

Laid off tech workers face a difficult situation, with more candidates to compete against and fewer opportunities.

“The early-stage and mid-market companies are saying, ‘look, we don’t have 10 openings anymore. We have one, and we have 10 people in the pipeline,’” said Albert Squiers, who leads the technology practice at Fuel Talent.

“Trying to find a job now feels very daunting,” said Evan Weisenfeld, who was laid off from travel startup Hopper and is using Silver Lining to help land a new gig. “Not only am I seeing more and more companies laying people off, the published numbers of 30 million people filing for unemployment makes it feel like I’m competing against the world to find my next job.”

With layoffs and hiring freezes, there are fewer companies competing for the attention of potential new employees. That makes it easier to recruit, said Hadi Partovi, CEO of the Seattle-based Code.org. The computer science education nonprofit is hiring for a wide range of technical and curriculum positions. Its non-labor expenses are also dropping significantly, Partovi said.

But he noted that now “a lot of people are worried about making job changes,” which could make it more difficult to find talent.

Squiers said he hasn’t seen huge shifts in benefits or salaries offered. Spector noted that “a strong balance sheet does more to impress candidates right now than a big name or fancy perks.”

A robust remote work infrastructure might also be advantageous during the shelter-in-place and social distancing orders.

For companies that are hiring, recruiting and onboarding practices are already shifting. Zillow Group, which is allowing employees to work from home until at least the end of 2020, recently rolled out a new virtual onboarding program. Mobile marketplace startup OfferUp is doing the same and uses a video of CEO Nick Huzar giving an office tour to help welcome new employees virtually. The company has hired 50 people since going virtual.

Police body cam maker Axon, which has large Seattle office, is piloting a new hiring approach for remote employees as it looks to fill more than 500 open roles. It has also moved the recruitment process completely online.

“Given our hiring, we have not slowed down during COVID, but have become more flexible,” said vice president Luke Larson.

It can be challenging to welcome new employees with no physical office, and without the common understanding that can come from meeting in person.

“We have had to be more thoughtful and planful, because the new hire won’t get to know people in the hallway or while making coffee, so it is taking longer for them to build new relationships,” said Karen Clark Cole, CEO of Seattle research and design firm Blink UX. “There’s not any leaning over asking a quick ‘how do I find this’ and getting support in a quick, friendly and personal way.”

Blink UX encourages managers and mentors to check in more often and set up “buddy networks” for each new employee, Clark Cole said. The firm has brought on more than 20 new team members since the outbreak began.

“As long as our client work continues to come in, and our current staff are fully utilized and forecasted to be booked for 1-to-2 quarters out, we consider it safe to hire,” Clark Cole said.

A recent survey found that about one in six employers are providing subsidies to manage the cost of working at home, such as WiFi, childcare, office equipment, and utility expenses.

Culture-building has been a big focus for Docugami, the AI document engineering startup that has doubled in size in recent months.

The startup holds twice-daily virtual coffee breaks where team members can get to know each other personally on video chat. The team held a five-day virtual offsite recently, and a virtual team lunch where everyone ordered from a favorite local restaurant and talked about the dishes and selections as they ate. The company hired a troupe of magicians for a virtual show, and one of its employees, an accomplished musician, teamed with his bandmates to entertain his colleagues with a virtual concert.