Taking a look back at another week of news from Cupertino, this week’s Apple Loop looks at the feature list for the iPhone 6S, iOS 8.4 and Beats, fifteen Apple Watch issues, smartwatch sales projections, security issues over the Apple Watch, mobile advertising breakdowns, the Lily drone, App Store listing tips, and should Apple buy Greece?

Apple Loop is here to remind you of a few of the very many discussions that have happened around Apple over the last seven days (and you can read our weekly digest of Android news here on Forbes).

It might not be announced until September, but details of the iPhone 6S are going to become known as it moves through the external design and manufacturing process. Kicking off the first big tranche of information, Forbes’ Gordon Kelly rounds up the information from KGI Securities’ Ming-Chi Kuo:

The Talking Point – Force Touch is what will likely prove to be the key selling point of the 6S models. Having introduced it on the Apple Watch and 13-inch MacBook Pro it makes perfect sense for Apple to extend this to the iPhone (and eventually the iPad).

How Apple does this will be crucial. The Apple Watch isn’t immediately intuitive and iPhones already have gesture, swipe and long press commands. Adding another must be done right.

For the eleven bullet points, head on over to his full post.

With the ninth updated to iOS (in seven months) being prepared – presumably for WWDC – there are more signs of the integration of Beats software into Apple’s mobile OS. Beta 3 of iOS 8.4 was released yesterday, and Gordon Kelly tries to track down the musical streaming service that is still missing in action:

For a long time iOS 8.3 was rumoured to include the long awaited Spotify rival, but having drifted to iOS 8.4 it is surprising that no test features or even code have given away its existence.

There is still time the Beats streaming service to be dropped in there (Apple typically tends to do four to five iOS betas before official release) or for it to arrive via a dedicated event, but the lack of any telltale signs at this stage is surprising.

Given WWDC is developer focused, Beats might be a better bet for September’s new iPhone launch event – and this would leave more time to negotiate ether deals with the music industry.

15 Issues With The Apple Watch Resolved?

As the Apple Watch was launched, 9to5Mac’s Jeremy Horowitz highlighted fifteen issues with Tim Cook’s wearable. One month later, were these issues addressed, were they real concerns, or has time with the watch proved them to be early adopter’s planting some tall poppies? Horowitz returns to his list:

Several reviewers flagged the Watch’s auto-on/auto-off screen as an annoyance for various reasons, primarily its tendency to not actually turn on whenever desired. While the complaints were valid — including ones that the screen turns off too quickly when in the midst of use — the problem is not as pronounced as the worst howls suggested. The feature works most of the time, and when it doesn’t, a tap on the screen turns it on.

Solution: Hopefully, a software update will make the accelerometer a little more generous in recognizing “wrist up” motions, and the OS a little less willing to shut the screen off mid-use. Until then, a quick tap on the screen will suffice.

IHS Technologies has been looking at the smartwatch market, and while the headline number for projected smartphone sales in 2020 is a nice 1010 million, I’m more interested in its prediction for sales of the Apple Watch this year… around 19 million. Forbes’ Paul Lamkin:

IHS’ forecasts are based on Apple shifting around 19 million of its just-launched smartwatches this year; resulting in an estimated 56% of the market share.

That’s a pretty conservative prediction as, back in November, Morgan Stanley forecast 30 million Apple Watch sales in 2015. “Our 30m unit estimate implies 10% penetration into Apple’s 315m iPhone 5 or newer installed base exiting 2014, which is lower than iPad penetration of 14% in its first year but higher than iPhone at 7%,” it said.

Back to the IHS forecast and it’s stating, by 2020, the Cupertino tech giant’s share of the market would have shrunk to 38%, with 96 million Android Wear shipments helping Google to a 22% piece of the wearable pie. That leaves 40% of non-Apple or Google smartwatches – with the likes of Pebble, Microsoft and even Samsung, with its own Tizen software, potentially playing catch-up.

The big unknown in all of these numbers is just how the public will take to the smartwatch – the geekerati love the computer on the wrist but that’s not enough users to build a sustainable and profitable market. 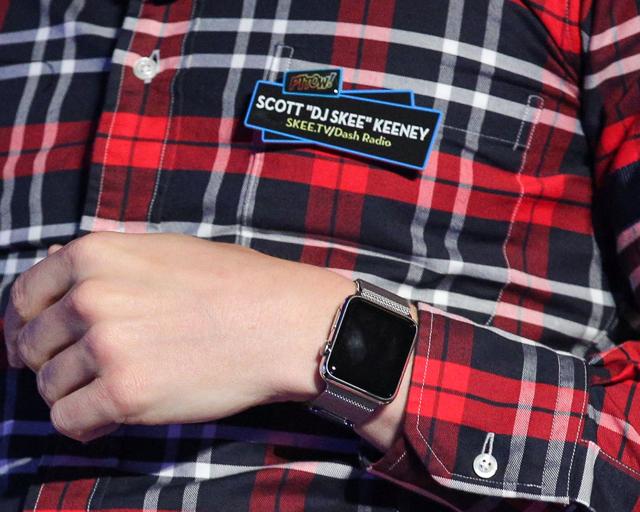 DJ Skee, speaks at the 2015 PTTOW! Annual Summit at Terrenea Resort on May 7, 2015 (Photo by Imeh Akpanudosen/Getty Images for PTTOW!)