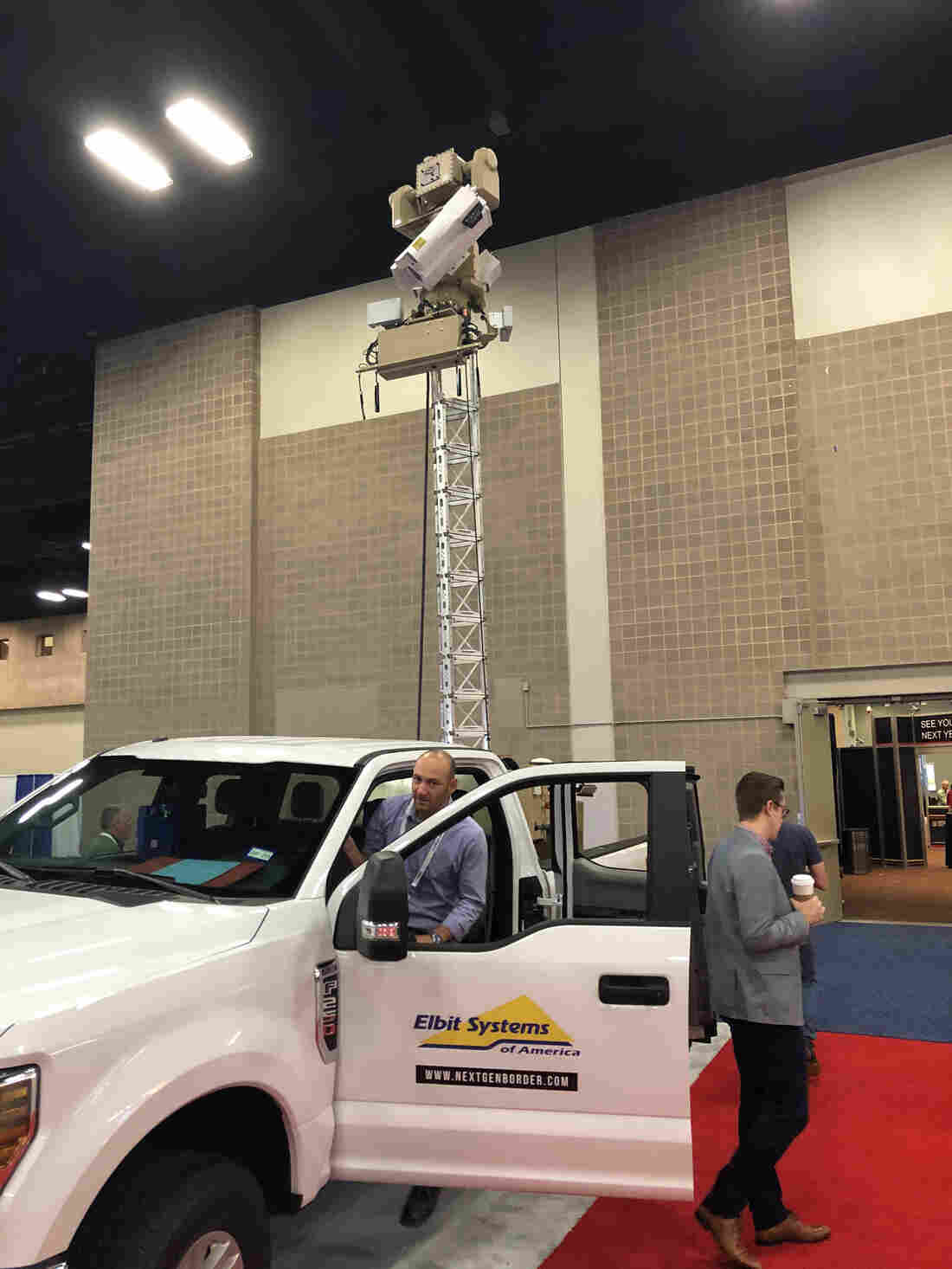 U.S. Customs and Border Protection is testing autonomous surveillance towers like this one, parked at the Border Security Expo in San Antonio, to improve the tracking of illegal crossers. Critics of the border wall say the government should favor virtual technology over steel and concrete. 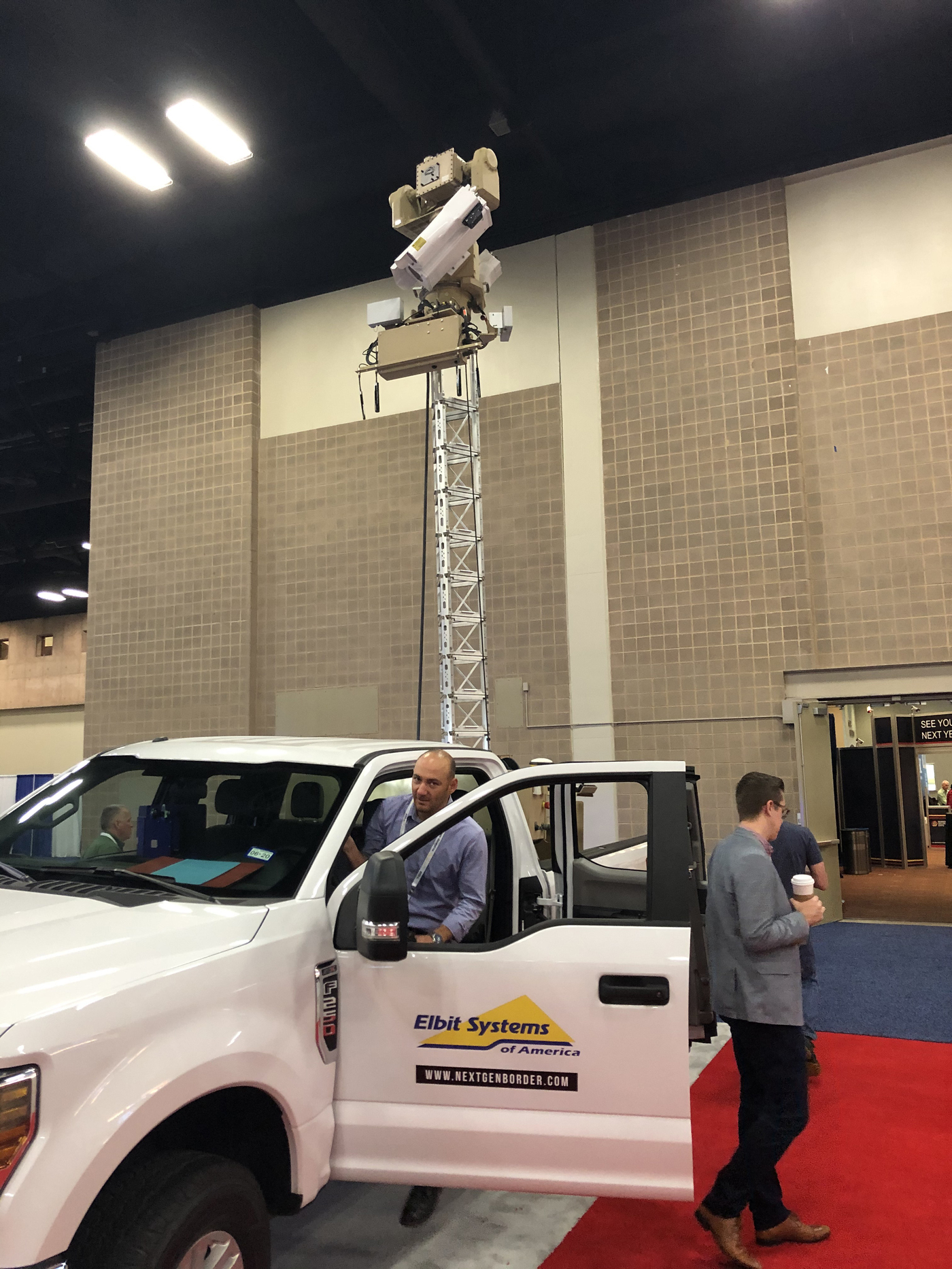 U.S. Customs and Border Protection is testing autonomous surveillance towers like this one, parked at the Border Security Expo in San Antonio, to improve the tracking of illegal crossers. Critics of the border wall say the government should favor virtual technology over steel and concrete.

Trump’s massive border wall gets all the buzz.

But U.S. Customs and Border Protection is quietly testing a new generation of free-standing surveillance towers on the Arizona border that could revolutionize border security. The telescoping towers are equipped with infrared and daytime cameras, along with laser range-finders and illuminators that can zoom in on a target miles away for a close-up. They’re mounted in the bed of a Ford F-150 pickup, so they’re completely mobile and can be operated remotely.

They can tell an agent if an object moving north is a cow or a single migrant or a family.

“The camera sees something, it’s going to alert and send that information to an agent in the field. So my iPhone will have an app on it and that information will come directly to me,” said Kelly Good, deputy executive director of CBP’s Program Management Office Directorate. He’s in charge of technology acquisition for the Border Patrol.

Last month, the Inspector General’s Office of the Homeland Security Department released a report critical of the Border Patrol’s single-minded fixation on a wall as the answer to border security.

“CBP’s inability to effectively guide this large-scale effort poses significant risk of exponentially increasing costs,” the report said. In fact, the audit said Border Patrol insisted on a wall, even though the agency’s own internal analysis identified domain awareness technology and boots on the ground as smarter solutions in certain border regions.

“We now are in a time where we can build this virtual border wall technology. We have that already. I mean, you got the autonomous surveillance towers,” said Rep. Henry Cuellar, a Texas Democrat from a border district where CBP proposes to build 121 miles of barriers. “But there’s political pressure from the White House. They’re saying, ‘Build me the wall. Get me miles.’ “

Last week, three landowners in the Laredo area filed legal documents in federal court to try to stop the Justice Department from condemning their riverside property for wall construction. One of their main arguments is the inspector general’s report.

“Ten years ago everybody was using BlackBerrys, but now everyone’s using the latest iPhone,” said Carlos Flores, an attorney representing property owners. “And so the technology for securing the Southern border has grown dramatically so that we have technology that we can use today that is probably more cost effective than this antiquated border wall.”

CBP counters that the agency needs both the wall and the mobile towers because eyes in the sky can detect illegal crossers but they can’t stop them.

“So if you have just technology, they can still come right through there. All they have to do is get across, get onto that highway, load up in a car, and they’re gone,” said CBP’s Kelly Good. “The wall or barrier is giving you time to slow it down.”

To the criticism that CBP did not consider cheaper, alternate methods to control the border, the agency responded that it was following an executive order from the president to immediately construct a physical barrier.

CBP has created a flashy webpage for daily updates on border wall construction. The current count is 265 miles of border wall system built — both new construction and replacement of outdated, dilapidated barriers. Trump brags often about the wall as one of his greatest accomplishments in the past 3 1/2 years.

But the future of the southwest border barrier is in serious jeopardy if Trump doesn’t win a second term.

“There will not be another foot of wall constructed in my administration,” Joe Biden told a convention of Hispanic and Black journalists last week. The presumptive Democratic nominee agrees that a 30-foot-tall structure is not the only answer. “I’m going to make sure that we have border protection,” he continued, “but it’s going to be based on making sure that we use high-tech capacity to do it.”

While Trump’s Border Patrol says it must have a physical barrier, the agency may rediscover a virtual wall under a Democratic White House.