You are here: Home / Technology / City of Covington IT director recognized by peers as a ‘rising tech star’ for digital transformation efforts – User-generated content

Within City Hall, “I don’t know, ask Kendall” has been a common refrain among City employees who go to IT director Kendall Huff a dozen times a day with questions about technology, software, and uncooperative computers and phones. 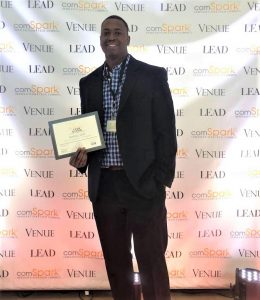 The City of Covington’s Kendall Huff was recognized as a ‘rising star’ for his role in the IT modernization efforts at City Hall (provided photo).

Now Huff’s status as the “go-to guy” has been officially recognized among his peers.

Huff, whose official title in Covington is systems analyst/project manager, was given a “2019 Rising Tech Stars Award” at the comSpark Tech and Innovation Summit this week in Sharonville, OH.

The award recognizes “IT professionals that are on the fast track to becoming the future technology leaders in our region” and was given by Lead Tribune Media Group, the publisher of Venue Magazine and Lead Magazine.

“It’s nice to be recognized within the IT community for what we’re doing here,” he said.

Huff has worked in Covington for two years, coming to the City from Meridian Bioscience and before that Advanced Testing Laboratory and the U.S. Army Corps of Engineers. He has a Masters’ of Science from American Military University and is working on an MBA from Thomas More University.

During his time in Covington, Huff has overseen the “digital transformation” of the City, leading a top-to-bottom update of software and database management, cybersecurity, and IT operations with the goal of improving service to residents and businesses. Because of him, the City has also taken over IT management for the Housing Authority of Covington.

“Covington – and by that I mean both City Hall and the community we serve – are really fortunate to have someone of Kendall’s experience and intellect,” Johnston said. “His efforts to modernize our IT infrastructure have really paid off.”