It looks like chunks of tuna fish in a can, but it’s not. It is actually processed larvae of fruit flies and it’s packed with protein and minerals.

Israeli startup Flying SpArk grows the larvae, turns them into a protein powder naturally enriched with minerals, calcium and magnesium, and separates the oil. The powder is then used to create the texture and flavor of meat, poultry and fish alternatives.

Flying SpArk displayed some of its unique alternative meat protein products, including the canned NOTuna, last month in Tel Aviv at FoodTechIL, an event thronged by investors and entrepreneurs who wanted to see what the Startup Nation was up to in the food tech sector.

More than 1,200 participants attended the event, including senior executives from major global food and beverage companies such as PepsiCo, Danone, Mondelez, and Givaudan, a Swiss manufacturer of flavors and fragrances.

There were no tastings of NOTuna at the event, though this reporter was told that it tastes and smells just like the real thing. The ‘NOTuna’ product developed by Israeli startup Flying SpArk on display at the FoodTechIL event in Tel Aviv, September 23, 2019 (Shoshanna Solomon/Times of Israel)

Larvae are easy and cheap to cultivate; they use just a tiny amount of water and land in the production process, and they don’t generate polluting greenhouse gases. And they’re kosher, said a company representative.

Flying SpArk, co-founded in 2015 by CEO Eran Gronich, has attracted the attention of one of the world’s largest canned tuna processor and exporters, Thai Union Group, which has agreed to invest half a million dollars with additional funds if certain milestones are met, for a total investment of $3 million.

As the global population is expected to reach 9.7 billion by 2050, according to the United Nations, governments, entrepreneurs and investors are on the hunt for solutions that will feed the world sustainably.

“A balance needs to be struck between the creation of food, the preservation of the environment and global warming,” said Giora Bardea, CEO of the Strauss Group, in an interview at the event, adding that it was not an easy task. 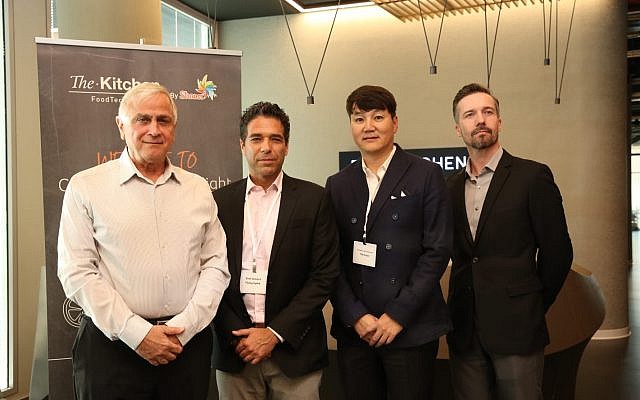 Customers are seeking out foods that are natural, healthy and chemical-free, the Israel Innovation Authority said in a report on the food tech industry’s potential.  They are also demanding transparency on ingredients and social responsibility. all of which is creating increased accountability and a demand for higher quality food. In addition, increased awareness in developed countries of the damage caused by farming is a catalyst for the search for alternative sources of protein

Companies such as Strauss have to tailor their products to the evolving needs of consumers, who often seek out gluten- or lactose-free products.

“Food is becoming personalized,” said Bardea. “The industry has to adapt to this trend, of demands for more personal and more diversified products. This is a huge challenge for the industry.”

Taking on the challenge, companies and governments are turning to technology, using digital innovations and big data for a variety of functions, including the monitoring of food processes, prevention of waste, and finding alternative protein sources to meat and poultry. The food industry, now undergoing a tech revolution, is considered one of the most important industries globally, with a monetary value of some $8.7 trillion in 2018, according to Plunkett Research.

In Israel, already known for its technology prowess and innovations in agriculture, the food tech sector has been growing over the past few years.

According to data compiled by Start-Up Nation Central, there are 350 tech companies that operate in the agri-food tech sector, more than a third of them founded over the past five years. In just the last 3.5 years, 2016 to mid-2019, 124 startups were founded — more than the total founded in the previous six years.

The rate of new company creation has sharply accelerated in recent years with an annual average of 37 new startups since 2014, SNC said.

Israel has a “significant presence,” the SNC report said, in the field of cultured meat, sugar alternatives, new sources of protein, individually tailored nutrition and food products, food monitoring and safety throughout the production and supply chain, and the digitalization of the processes, including apps, in all fields, from the farm to the table. 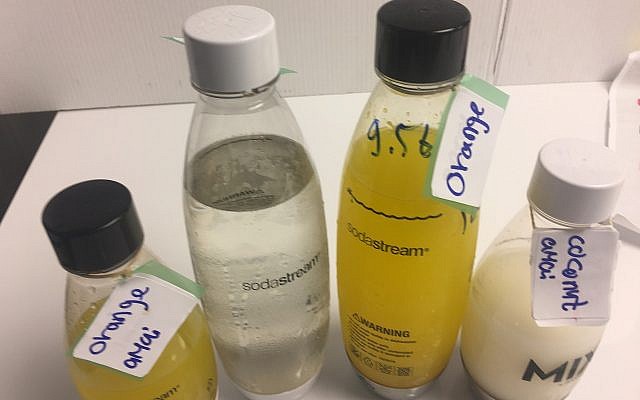 Amai Proteins has developed a protein-sweetened soda for SodaStream — with 50% to 80% less sugar content — in a variety of flavors, including lemon, orange and coconut. (Courtesy)

Israel’s growing presence in food and agriculture technologies has been boosted by new tech incubators. Five years ago the Strauss Group won a tender to set up the country’s first food incubator, a joint venture with the Innovation Authority, to help entrepreneurs develop their ideas. To date, the incubator, called The Kitchen Hub, has invested in 13 startups,which get NIS 2.5 million to 3 million ($700,000 to $850,000) from the two bodies.

“When we started, the startups we saw were mainly about food innovation,” said Amir Zaidman, the head of The Kitchen Hub, in an interview on the sidelines of FoodTechIL, referring to when companies mix various food ingredients and come up with new products. Now, he said, the hub is seeing more companies operating in the food supply chain — creating systems to monitor food safety or robots to handle packaging.

“It is fascinating,” he said. “We are incubating along many different lines.” These include meat replacement startups that create plant-based proteins or meat from cells, or personalized nutrition startups.

Many of the Kitchen Hub startups displayed their wares at the FoodTechIL event, sponsored by the Strauss Group. Aleph Farms, for example, is developing cell-based meat, while Amai Proteins has developed sweet proteins based on those found in plants that grow along the equatorial belt.

In this January 16, 2019 photo, chef Amir Ilan prepares a lab-grown steak during a presentation by the Israeli company Aleph Farms, in Jaffa, Israel. (AP Photo/Tsafrir Abayov)

Better Juice has developed a way to cut all types of sugars from fruit juices by converting the sugars into non-digestible compounds, like dietary fibers, without affecting the taste and smell of the product.

This reporter sampled the startup’s orange juice, and found it delicious. 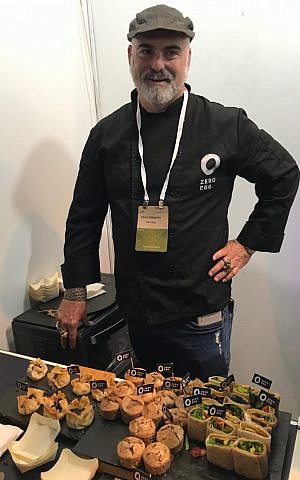 Zero Egg displaying products made out of its plant-based egg replacement at the FoodTechIL event in Tel Aviv; Sept. 23, 2019 (Shoshanna Solomon/Times of Israel)

Similarly, when Zero Egg offered tastings of rolls, muffins and savory pastries made with its plant-based egg replacement, this reporter could not discern anything strange about the taste. The product is based on proteins extracted from plants and legumes, like peas or soy, and transformed into powder. Before use, the powder is rendered liquid by adding water, and can be used as an egg substitute in any recipe, including omelets, baked goods, mayonnaise and sauces. The product has high nutritional value and no cholesterol, says the Ashdod-based firm.

“It is good news for people who are vegan or have food allergies,” said Liron Nimrodi, the CEO and co-founder of Zero Egg, which was set up last year. The company aims to help manufacturers create products with “zero egg inside,” she said, and eventually reach end consumers in stores.

Also at the event, Rilbite, a maker of plant-based minced meat, dished out piping hot tastings of meatballs in a tomato sauce stew.

DLR — Deep Learning Robotics — displayed a robotic arm that uses artificial intelligence and computer vision to learn how to replicate any task, simply by observing how humans perform them. The “watch and learn” robot is at the pilot stage and being used by PepsiCo and Strauss in their packaging plants, said CEO Carlos Benaim.

The robot can learn how to place biscuits in a specific order while packaging, also sort good potatoes from bad ones, or package mangoes. “In the next 1.5 years we are looking to scale up and sell our product all over the world,” said Benaim. 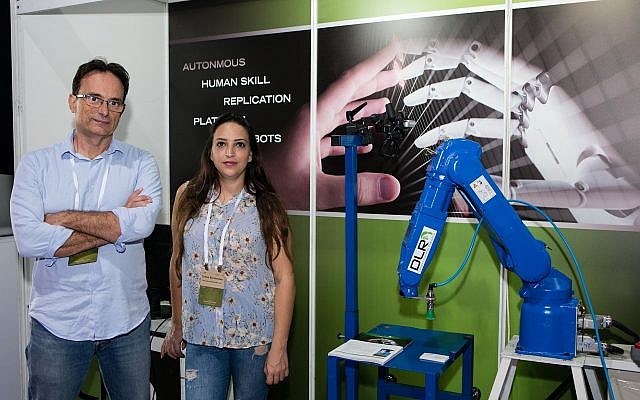 DLR – Deep Learning Robotics CEO Carlos Benaim, left, with a colleague and a robotic arm that can watch and learn (Achikam Ben Yossef)

Most products developed by startups are still in development, but some are at the pilot stage with potential consumers.

Another incubator supported by the Innovation Authority is the Trendlines Agtech incubator, supporting startups in the field of agritech. The hub acts mainly to diversify and develop alternative food sources for the food industry.

A third incubator, called Fresh Start, was formally launched earlier this month. The consortium, made up of the venture capital fund OurCrowd, Israel’s largest food manufacturer Tnuva, Tempo Beverages, and US venture capital fund Finistere Ventures, won an eight-year license from the Innovation Authority to run the incubator, which was originally called Sparks, in the northern city of Kiryat Shmona.

The incubator will focus on advancing food technologies along the entire chain of the food and beverage industry, specifically in the fields of milk and protein substitutes, improving nutritional value and personalized nutrition, innovative raw materials, smart food packaging, cannabis, and Industry 4.0, including the Internet of Things, artificial intelligence, and big data, the consortium has said.

The new incubator is “going to put over a hundred million dollars to work developing solutions all through the food and beverage supply chain,” said Jon Medved, CEO of OurCrowd, in a text message. “I think food tech is going to become one of the most active areas of innovation. It has to be, because the world’s food supply, and everyone’s health, depends on it.”