You are here: Home / Technology / Investors are buying up these ‘tariff-proof’ tech stocks to keep exposure to the sector – CNBC

Enterprise software is emerging as an exception to some investors’ caution around the technology sector.

Wall Street analysts and investors including Carl Icahn are turning to software companies, which don’t rely as much on supply chains and manufacturing, as the trade war and strong dollar threaten the rest of the high-flying sector.

Although names like Microsoft, Salesforce and Twilio are not entirely “tariff-proof,” they may hold up better than some consumer technology names that manufacture products in China, according to Rishi Jaluria, senior research analyst at D.A. Davidson.

One ominous factor is a strong dollar. The S&P 500 Technology sector — which doesn’t include Amazon, Google or Facebook — is the most international of any S&P sector when it comes to revenues, according DataTrek Research. Fifty-eight percent of sales come from outside the U.S., compared with 39% for the S&P 500 overall. Materials is the only other sector that gets more than half of its revenue outside of the U.S.

Equity markets saw a sharp pullback this week after more tariff escalation, a fall in the Chinese yuan against the dollar and tumbling bond yields that fueled global growth concerns. Tech shares led a rebound on Thursday, with the sector rising more than 1%.

Still, Mark Newton, president and founder of Newton Advisors, is bearish on tech and said it could see more of a pullback throughout the rest of August. He’s recommending that clients take some profits and diversify out of popular technology stocks, which have led a record bull run since the financial crisis.

Wedbush Securities managing director Dan Ives is also cautious on tech. The U.S.-China trade battle has been a jolt to the sector, “with a new level of uncertainty representing a dark cloud over the sector,” Ives said. And if the trade situation escalates, Ives is anticipating major impacts on supply chains that could hit semiconductor companies, and Apple.

“We believe on large cap Microsoft is a compelling name to own with negligible China exposure and overall the software sector we would be buying here as it is primarily immune from the trade war,” Ives said.

The S&P technology sector is down 1.7% for the month, compared with a 1.4% drop in the broader S&P index. Microsoft is up about 1.4% in that time frame.

Cloudera has also rallied 37% in the past month after Icahn revealed a new stake in the data analytics company. The billionaire activist investor told CNBC’s Scott Wapner on “Fast Money Halftime Report ” on Thursday that aside from some opportunities like Cloudera, he’s far from bullish on the broader market.

“There’s certainly some very interesting opportunities, but you have to worry about a full-scale recession,” Icahn said. “Cloudera is undervalued.”

But not every software name is in the black. Salesforce is down about 6% in the past month, Docusign is down 11%, while ZenDesk has fallen 14%. Twilio, a top pick from D.A. Davidson’s Jaluria, is down more than 6% this month.

DataTrek’s Colas is less bullish on software, and said he doesn’t see it as necessarily “safer” than tech companies that deal with hardware. Enterprise software companies still need companies willing to spend money — which could be threatened by waning business confidence thanks to tariff uncertainty, Colas said.

There are a few factors that might keep the sector in vogue. Technology still has the highest net margin of any sector, and falling interest rates help higher valuation sectors, since investors are desperate for some sort of yield. Colas also said tech is still “the only secular growth story around” as companies use their free cash flow to buy back stock.

“Ultimately investors don’t see many sectors that are as attractive over the long term,” Colas said. “It’s hard to get too bearish on Tech, even with everything that is going on.” 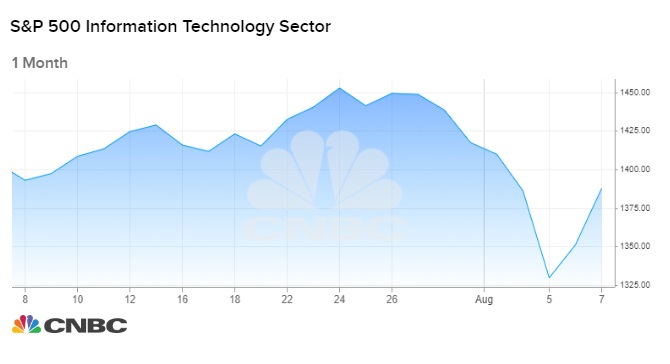