You are here: Home / Technology / Liberal arts degree? No degree at all? You are the perfect candidate for a tech job – CNBC

Hiring people for technology jobs is more important than ever — and also getting harder.

More than half of the companies on the CNBC Technology Executive Council said it has become more difficult to fill open tech positions compared to a year ago, while fewer than 10% say it’s gotten easier. Additionally, one-third of members say that, outside of cybersecurity, finding qualified job candidates represents the biggest challenge facing their business over the next year.

So what are they doing about the persistent tech skills shortage? Most members (87%) say they’ve found candidates outside of traditional engineering backgrounds, with 63% saying they’ve even hired candidates without a college degree. And as a result, almost all respondents say their teams have become more diverse.

“There is significant debate over these statistics, but it’s safe to say that we have been holding steady at around 700,000 to 1 million tech job openings in the U.S. for the past 12 to 24 months,” said Wendy Pfeiffer, chief information officer of cloud storage company Nutanix and a member of the CNBC TEC Council.

The third-quarter 2019 survey of the CNBC Technology Executive Council, which represents a diverse set of senior-level technology executives at companies and organizations across all sectors of the economy, was conducted from Sept. 9-Sept. 22 among 54 council members.

“Tech companies and enterprises who depend on digital technologies to drive their primary mission are in a virtual arms race to hire and retain tech-skilled workers,” Pfeiffer said.

NIkos Moraitakis, CEO of software recruiting firm Workable, which services 20,000 companies worldwide, agrees. The skills shortage in tech has companies scrambling for solutions. As he explains, “they cannot wait for another four years to get the next crop of strong candidates, so they are widening the pool of candidates for these jobs.”

DocuSign‘s chief technology and operations officer, Kirsten Wolberg, said the company is reviewing job postings and asking the question: Does this role require a four-year or vocational degree, or can we take someone with a solid educational base and then teach them the skills on the job?

Making the labor shortage even tighter: Tech job unemployment rates are at an all-time low (around 1%), and more mid-tier tech workers are job-hopping than ever before.

“We need to think this way because today’s lower unemployment rates mean there are fewer candidates with prior experience available for roles,” said Wolberg, who is also a member of the CNBC Technology Executive Council.

Excluding cybersecurity, which of the following technology challenges is the biggest risk to your company in the next year? 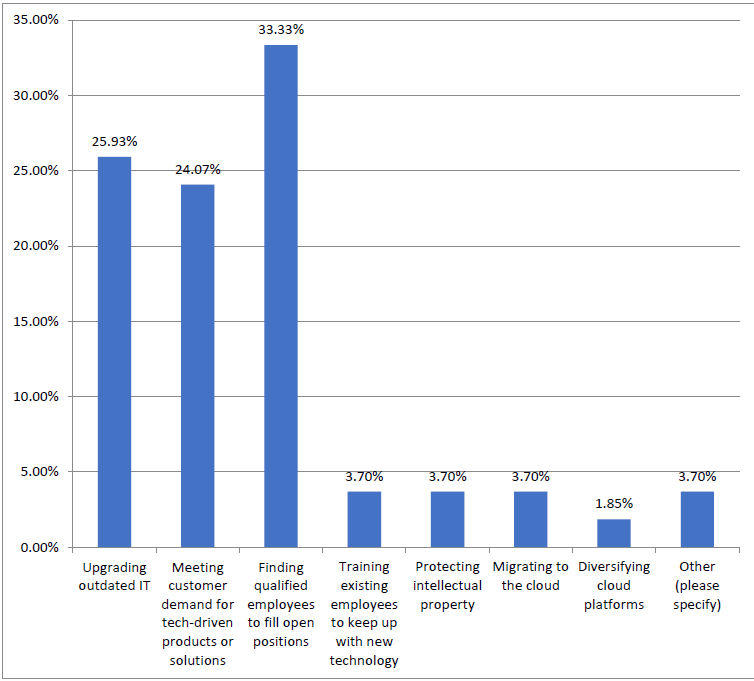 Limited visa programs that have traditionally supplied skilled workers for open positions are also an issue.

“The big technology companies are taking all the visa workers, and other companies who need tech help have to scramble,” said Jane Oates, president of WorkingNation, a nonprofit focused on the changing labor market. The number of skilled visa positions allowed by legislation is limited to 63,000 annually, she said, and “most corporations would tell you that should have gone up.” At the same time, “people are focused on building domestic talent,” she said.

In some specific tech niches, such as artificial intelligence, Silicon Valley’s dominant players are making the task nearly impossible. “I work with several start-up AI companies who complain that the big three (Google, Facebook, Amazon) are hiring ‘every’ college grad with a machine-learning/data science degree sight unseen,” Pfeiffer said.

She said the situation puts pressure on organizations to both uplevel skills of existing tech employees and then fill the funnel of entry-level positions with workers who carry a different pedigree.

“The demand is creating a really ripe environment for people who are in non-traditional majors, liberals arts majors who bring different aspects to the tech space,” said Art Bilger, founder and CEO of WorkingNation. He added that this also leads to a rise in more women and people of color in these roles.

The CNBC Technology Executive Council survey found that nearly 97% of companies said they had made more diverse hires in the past year.

WorkingNation’s Oates cited the Greater Washington Partnership’s collaboration with the Business Roundtable and others to offer a digital certificate program for non-technology college majors through regional colleges and universities. The Washington, D.C.–Virginia–Maryland effort, a pioneering regional collaboration, is being led on the corporate side by Wes Bush, the former chairman and CEO of Northrop Grumman. It includes employers like J.P. Morgan, Under Armour, Amazon, Booz Allen Hamilton and Stanley Black & Decker, McKinsey & Co., Northrop Grumman and General Dynamics.

“Businesses in that region saw that digital talent was their greatest need, and people across all majors are getting that certification and getting priority internships, and the hiring is just beginning now,” Oates said.

The CoLAB Digital Tech Credential program focuses on data analysis, visualization and security and is currently being offered at George Mason University, Virginia Tech, University of Richmond, American University, VCU and Georgetown University for non-STEM students pursuing degrees in non-technical fields such as HR, logistics, liberal arts and finance. Other schools in the region, including Johns Hopkins, Howard University and the University of Virginia, are planning to launch versions of the program.

There also are more labor market partnerships today that emphasize diverse and traditionally underserved sources of tech candidates, such as Tech Qualled, NPower and GirlsInTech.

These efforts are paying off, and the results are showing up in Bureau of Labor Management data. Employees are leaving lower-skilled jobs in unprecedented numbers, according to the BLM. In its August labor market report, the BLM cited investment in retraining and access to entry-level tech and services jobs as a key driver of this trend.

I speak to many new job applicants who have built and run online stores, created social media campaigns, managed complex financial transactions — all online, all using available tools — but who do not consider that they have any special ‘technical’ skills to bring to their jobs.

Millennials and, to a greater degree, Gen Z individuals, represent an increasing percentage of the available workforce.

Pfeiffer said by some estimates they will comprise as much as 70% of the global workforce by 2030, and they are by the nature of their lives more digitally savvy regardless of education.

“These workers (and consumers) have been acculturated in the age of ubiquitous mobile computing. The tools they use to conduct their daily lives, such as near-ubiquitous mobile application access, online purchasing, autonomous everything, IoT-enabled environments and more, have changed their perception of what technology actually is.

“I speak to many new job applicants who have built and run online stores, created social media campaigns, managed complex financial transactions — all online, all using available tools — but who do not consider that they have any special ‘technical’ skills to bring to their jobs. … Having those experiences, even 10 years ago, would have been near-impossible entry criteria for most role-hopping tech job applicants.”

Xerox chief information security officer, Dr. Alissa Abdullah, a member of the CNBC Technology Executive Council, said there also is a danger of focusing too much on a narrow, traditional definition of a tech pedigree as dangerous digital issues mount.

“The needs in cybersecurity vary from an artistic mind, to a scientific mind, to technology-focused,” said Abdullah.

Citing a forecast from Cybersecurity Ventures, she noted that there will be 3.4 million unfilled cybersecurity jobs by 2021.

“The idea that these should all be filled with technology degree or college degree individuals continues to put us at a disadvantage when dealing with the adversary,” Abdullah said. “This is a cybersecurity battle of strength and will, and we have to overpower that strength and will with all of the tools in our arsenal, whether that be creative, scientific, technical or a mixture of all.”

The CoLAB program will be adding specialist programs in cybersecurity, machine learning and data analytics next year for students seeking technical degrees and job-ready skills attractive to employers.

“We’re seeing huge investments in the [information security] space, which creates the need for additional roles, but the traditional four-year degree path isn’t creating candidates with the skill sets required for the function. So we just have to look further afield,” DocuSign’s Wolberg said.

The labor market pressures will continue to work to the benefit of job seekers who stay on top of these trends, said Monster career expert Vicki Salemi.

She added: “I think this hiring trend will continue, because we’ll probably start seeing this field get more competitive as more liberal arts degree holders and non-bachelor’s degree holders realize this field is hot, not going away anytime soon, and in demand by employers who are hiring them.”

Correction: Wes Bush is former chairman and CEO of Northrop Grumman. An earlier version of this article misstated his title.