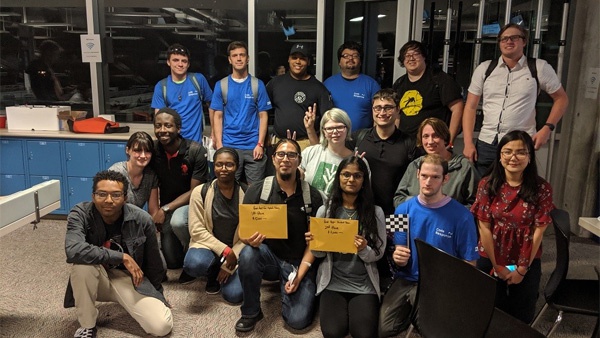 (Indianapolis, Ind.) – Ivy Tech Community College faculty and students participated in the AT&T FirstNet Hackathon where participants would develop an app for assisting first responders in the field. FirstNet is the only communication tool dedicated to public safety, including law enforcement, fire, and EMS personnel. It provides reliable communication services and highly secure data connections. By hacking for first responder mobile apps, developers can mature their ideas, get involved in an exciting community, and create something to further the greater social good.

Ivy Tech had more than 20 students participate, representing multiple communities across Indiana. The team worked overnight to develop a mobile app that would connect community members with Narcan, a drug known to be effective at counteracting an opioid overdose. Businesses or people, such as a pharmacy, firehouse, or even private citizen, could register they have Narcan. If an overdose would occur, anyone present could use the app to signal the immediate need for the drug and have it sent within a certain mile radius which would be potentially faster than an ambulance and without the need to call 911.

The Ivy Tech team won first place for Best Opioid Crisis App with a prize of $5,000. They also won second place in the Best Student App category which earned them a $2,000 prize.