From a throng of Louisiana Tech students filling the stands, to the 2019-20 players for both the men’s and women’s teams dancing their way into the arena and stirring the excitement for Tech Madness, a season kickoff event the school’s students lobbied to bring back to the TAC. From prize giveaways, a 3-point shootout competition between both squads and Kale Walters finishing off the night with a between-the-legs slam to win the dunk contest, there was plenty of likeable madness to go around ahead of the upcoming season.

What was maddening, the unlikeable variety, for the Bulldogs last year was their inability to stay healthy and playing the majority of the 33-game slate with a short bench. Guards Derric Jean and Exavian Christon both went down in the first couple of weeks with season-ending injuries. 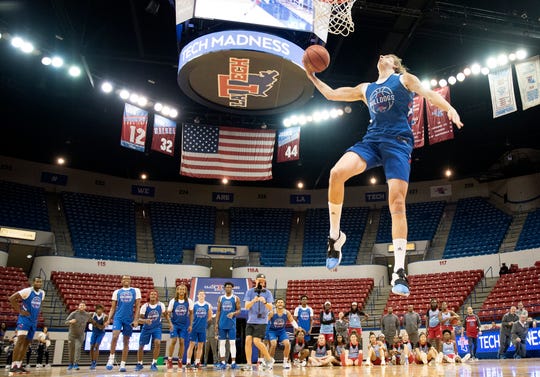 But through the adversity, it afforded Louisiana Tech to build valuable depth and gain a ton of game experience for plenty of young players, who most are all back and a year older.

“Experience is a really valuable thing,” Tech men’s hoops coach Eric Konkol said Tuesday night. “Experiencing success, experiencing some adversity. All is the story of life, right? Our guys have gone through those things. We’re going to draw back on those things.

“We learned a lot over last year through some good times and some difficult times. Those guys are back thankfully. We get a chance to make improvements continually and work toward a championship. And that’s always our goal here.”

Jean and Christon are both back healthy. Tech lost arguably it’s most athletic player, Anthony Duruji, who transferred to Florida, but former McNeese State shooting guard Kalob Ledoux is finally eligible. Star point guard DaQuan Bracey, a preseason All-Conference USA selection, looks to help lead a Bulldogs’ roster that has 10 upperclassmen. Tech was predicted to finish third in 2019-20 in the preseason poll.

“We talk often about there is no staying the same. You’re either getting better or getting worse. Each guy we challenged them, if you played yourself last year, how badly would you beat them?” Konkol said. “We’ve asked that of (Bracey), we’ve asked that of each guy. I think each guy has made a marked improvement in some aspect of their game.”

Not only does Konkol feel like his team is deeper, he and his staff has made a conscientious effort to add size and shooters. They landed West Virginia transfer Andrew Gordon, a 6-10 250-pound big guy to accompany Mo Muhammed and Oliver Powell inside. Juniors Xavier Armstead, a 34 percent 3-point shooter with McLennan Community College, and Lane Hartley, a 38 percent shooter from behind the arc, joined Tech from the JUCO ranks.

Adding those pieces alongside Ledoux, who made a name for himself at McNeese with the shooting prowess, Amorie Archibald, a two-year starter entering his junior season, as well as Jean, Christon and redshirt junior Jacolby Pemberton, the Bulldogs should have the ability the stretch the offensive floor.

While Louisiana Tech has had to trudge through the last two seasons with young players learning and growing up on the fly, going 37-29 over that stretch, Konkol believes it’s time to see the fruits of that adversity.

“We’ve got 10 guys on our team that are in their junior year or older. We’re battling some bumps and bruises in the dog days of practice, but I’m really excited about this group and I think our fans should be, too.”

Louisiana Tech will host LSU in the Hoops 4 Disaster Relief Game Nov. 2 at 4 p.m. and will officially tip off the season Nov. 6 at Texas-Corpus Christi.