You are here: Home / Technology / Most Seattle tech companies are actively hiring despite the pandemic, analysis shows – GeekWire

Even with the ongoing economic and health crisis, a majority of Seattle’s tech companies are still hiring.

Schoenfeld, who co-founded Simply Measured and is now VP of strategy at Drift, was looking for ways to help the local startup community as the pandemic changed how we interact with each other. Questions about hiring and culture kept coming up on his podcast, so he thought a hiring tracker might come in handy, particularly now.

The tracker pulls data from various online sources (company websites, job boards, LinkedIn, etc.) and includes tech-oriented companies headquartered in the Seattle area or with core operations in the city. It’s not a job board and companies don’t pay to be listed.

The latest update published today shows 67% of the 348 companies tracked with open roles, and 2,620 total roles across the region. About 42% of the companies increased headcount month-over-month; 35% remained stable; and 23% decreased.

The list does not include tech juggernauts Microsoft (1,394 open jobs) and Amazon (7,506 open jobs). 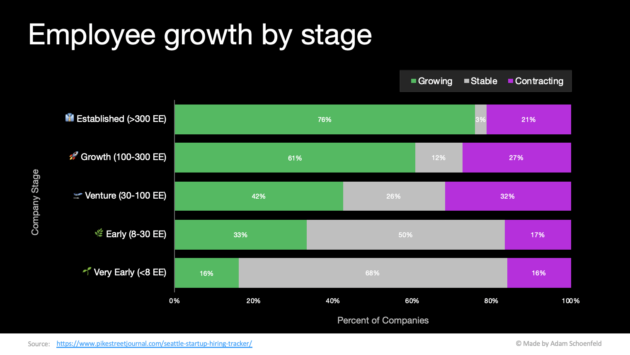 Schoenfeld noted that there are differences in job openings based on the stage of the company. For example, the rate of hiring is slower at early-stage startups. About a third of Seattle tech companies with less than 100 employees increased headcount last month.

“As a job seeker in the startup market, you’ll see a lot of opportunities listed, but you may need some patience in the current environment,” Schoenfeld said.

But there are still startups such as Ally, which just won Startup of the Year at the GeekWire Awards, and others including DemandStar, Shelf Engine, OctoML, Cabana, and Athira Pharma that are hiring rapidly.

And many of the more well-known, well-established companies “appear unfazed by the pandemic,” Schoenfeld said.

“It’s hard to know if they are winners *because* of the pandemic or if the winners just continue winning *despite* the pandemic,” he noted. “The cohort of public companies like Redfin, Avalara, and Smartsheet continue to grow fast and have dozens of open roles. It’s the same story with private unicorns like OfferUp, Remitly, Outreach, Icertis, Convoy, and Auth0.”

OfferUp, Remitly, Outreach, and Auth0 all landed hefty investment rounds this year. Even with the ongoing COVID-19 crisis, venture capitalists are pouring money into Pacific Northwest tech companies at unprecedented levels, significantly outpacing the number of deals and dollars invested in the first half of 2018 and 2019, according to a recent GeekWire analysis.

The hiring tracker data aligns with GeekWire’s previous reporting in May when we highlighted various Seattle-area startups and larger companies that were hiring despite widespread layoffs across the industry. Nearly 50,000 U.S. tech workers have been laid off since March 11, according to the Layoffs.fyi tracker, as companies cut costs to make up for slowing revenue amid the pandemic.

It also matches with anecdotal feedback from a recent survey of Seattle-area chief financial officers. A majority of the execs surveyed expect their businesses to fully recover from the downturn after experiencing temporary setbacks and uncertainty at the beginning of the pandemic. 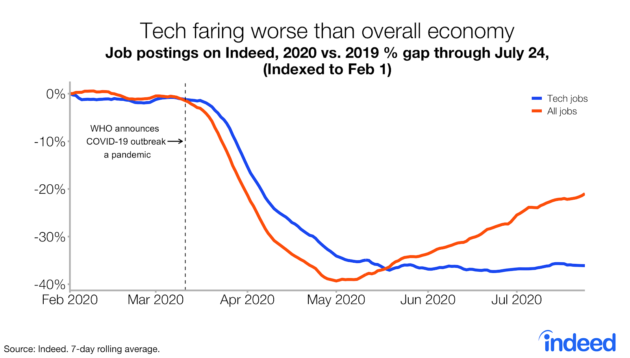 Seattle may be an outlier compared to the rest of the country. Tech job postings on Indeed fared better than overall postings in April and May, but are now performing worse, down 36% below last year’s level during the week of July 24. Indeed also noted a wider difference in overall postings vs. tech roles in non-tech hubs, as “tech companies may be pushing for centralization in major hubs rather than dispersion.”

“With fewer tech job postings and increased job seeker interest, in the field, competition for sector jobs is heating up. Companies are back in the driver’s seat, which could reduce tech worker bargaining power. In addition, benefits like unlimited time off and well-stocked snack bars could go on the chopping block. At the same time though, substantial geographic diversification of the tech workforce could occur if the sector widely adopts permanent remote work. Unless that happens, jobs may continue to concentrate in the major tech hubs, tightening the hold of places like Silicon Valley on this strategic part of the economy.”

Glassdoor reported that tech industry job openings fell 15% from June 22 to July 6, the biggest drop of any industry. “Tech had better weathered the earlier months of the crisis, but is now experiencing a more substantial slowdown,” Glassdoor noted.