Bandon, Ore. – Georgia Tech’s Tyler Strafaci won twice Thursday and advanced to the quarterfinals of the 120th United States Amateur Championship, eliminating a pair of University of Arkansas players and surviving an unusual finish to his round of 16 match against the Razorbacks’ Segundo Oliva Pinto.

In the afternoon match, Strafaci had lost a two-hole lead and went to the par-5 18th hole tied with Oliva Pinto. The Tech player hit a solid drive and second shot, but left his approach from about 100 yards just short of the front of the green. The Arkansas junior left his third shot in a greenside bunker. As he sized up his fourth shot, Oliva Pinto’s caddie stepped into the bunker and sifted the sand with his hand, incurring a loss-of-hole penalty which handed the victory to Strafaci.

The Yellow Jacket senior led for much of the contest, moving ahead on the fourth hole and leading by two holes after 12, but Strafaci struggled to finish off the Argentinian. Oliva Pinto made birdie on the par-5 13th to get within one and tied the match when the Davie, Fla., native bogeyed the par-4 16th. Both players parred the par-4 17th to set the stage for the strange finish.

Strafaci, seeded No. 41 in the match play bracket, earned a 2 and 1 victory over another Arkansas junior, Julian Perico, Thursday morning in the round of 32, rallying from a 2-hole deficit over the last six holes. Strafaci played from behind from the start when he double-bogeyed the first hole, and fell two holes in arrears when the 9th-seeded Peruvian birdied the 10th hole. But the Tech All-American rebounded to win the next three holes for a 1-up lead, getting a birdie at the par-4 11th, par at the par-3 12th and an eagle at the par-5 13th. He slipped back into a tie when he bogeyed 15, but finished off Perico with birdies at 16 and 17.

With the win, Strafaci set up a quarterfinal match Friday against Stewart Hagestad, a 29-year-old veteran mid-amateur from Newport Beach, Calif. The No. 16 seed Hagestad won the 2016 U.S. Mid-Amateur and has played in the last three U.S. Opens.

The 22-year-old Strafaci is attempting to win his third major title this summer and join Tech’s legendary Bobby Jones (1924, 1925, 1927, 1928, 1930), Matt Kuchar (1997) and Andy Ogletree (2019) as champions of the national amateur. He won the North & South Amateur on July 4 and captured the Palmetto Amateur title one week later. Strafaci, who competed in the 2018 U.S. Open at Shinnecock Hills and two U.S. Junior Amateurs, has played in three previous U.S. Amateurs and reached match play twice, advancing as far as the round of 32. Ranked No. 51 in the world, Strafaci will return to Georgia Tech for a fifth year in 2020-21 and is a three-time All-East Region and two-time All-Atlantic Coast Conference performer. 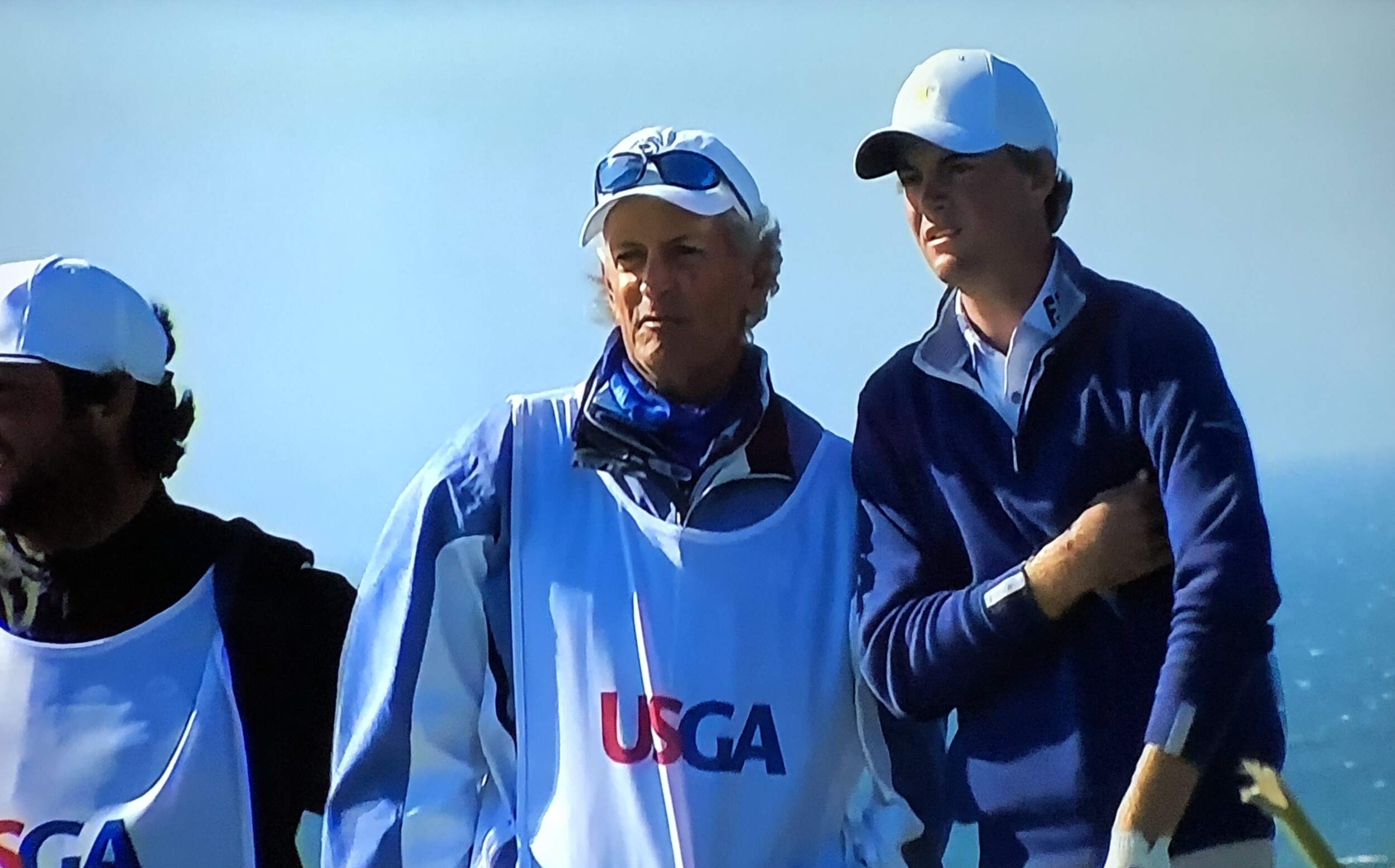 Strafaci discusses his tee shot at the par-3 15th with his caddie and father, Frank.

Georgia Tech’s golf team has completed 25 years under head coach Bruce Heppler, winning 64 tournaments in his tenure. The Yellow Jackets have won 18 Atlantic Coast Conference Championships, made 29 appearances in the NCAA Championship and been the national runner-up four times. Connect with Georgia Tech Golf on social media by liking their Facebook page, or following on Twitter (@GTGolf) and Instagram. For more information on Tech golf, visit Ramblinwreck.com.