TOKYO — South Korea announced in early August that it would end its reliance on Japanese suppliers for materials key to its high-tech electronics industry.

The move came in response to Japan’s decision to strip South Korea of its status as a trusted trade partner. That has created uncertainty about supplies of components vital to South Korea’s chipmakers and electronics manufacturers.

The plan makes sense at first blush. Over the long term, however, it may turn out to be a strategic mistake.

Investing heavily in an industry dominated by Japanese manufacturers will eat up resources that could be put to use in areas where Japan is weaker. That could then be used as a bargaining chip in negotiations with Japan. Seoul also risks spending billions on inputs for manufacturing techniques that could soon become obsolete.

The government’s blueprint envisions securing a stable supply of 20 critical products from non-Japanese sources within a year, and sets a five-year target for the remaining 80. The 20 priority products include hydrogen fluoride, resist and fluorinated polyimides, three materials used in manufacturing semiconductors and displays that are subject to Tokyo’s tighter controls.

In addition to introducing controls on exports of the three materials, Tokyo has also removed South Korea from the “white list” of 27 countries that are granted preferential trade status. The step is believed to affect some 1,100 items. The new rules will allow Japan to impose tighter controls on the export of any of these items to South Korea. South Korea’s high-tech industries developed by importing technologies from Japan, so they remain highly dependent on Japanese materials, components and manufacturing equipment. As a result, South Korea has been running an annual trade deficit of $20 billion to $30 billion with Japan.

The case for pursuing domestic production is clear. If Japan stops supplying key inputs to South Korea, the country’s all-important chip industry will grind to a halt. Semiconductors account for 20% of South Korean exports, so any serious disruption in production could greatly hamper growth.

But Seoul’s drive for greater self sufficiency may be a step in the wrong direction in the medium to long term.

Japanese companies control 70% to 90% of the global markets for hydrogen fluoride and the two other crucial materials. There are no challengers to their market dominance. South Korean manufacturers will have to spend huge amounts of time and money to catch up.

South Korean suppliers also face the risk of changing technology. Constant innovation in chips and displays can lead to frequent shifts in the materials and parts required to make them. The main display technology for computers and smartphones, for example, is moving from liquid-crystal displays to organic light-emitting diodes, and then to micro LEDs.

In computers, chipmakers are racing to develop 3D integrated circuits, which contain two or more layers of components stacked vertically, a big departure from the traditional method of putting the circuits on silicon wafers.

Japanese materials and parts makers keep pace with these changes by spending enormous amounts to develop new products. Meanwhile, Western semiconductor makers have dropped out of the manufacturing game and instead focused on areas such as chip design.

Two U.S. companies embody this trend: Broadcom and Qualcomm. Broadcom mainly designs and develops chips for telecommunications equipment, while Qualcomm specializes in chips for smartphones. Both outsource production, rather than running their own plants.

Arm of the U.K. concentrates on designing chips and makes no physical products of its own. Arm-designed chips power an estimated 90% of all mobile devices sold worldwide. It is said that smartphones cannot be made without Arm’s technology.

Meanwhile, Japan’s semiconductor makers failed to move up the technology ladder in chip design and development, relegating themselves to the role of suppliers to U.S. and British chip designers and developers. 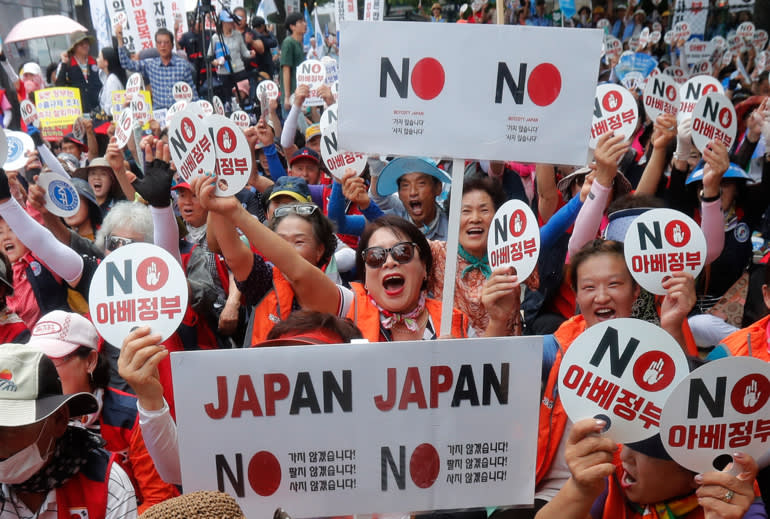 Protesters in Seoul denounce Japan’s trade restrictions on South Korea. The South Korean government said Monday that it would remove Japan from its own list of trade partners receiving preferential treatment.

In a nutshell, trade enables countries to specialize in products where they have a comparative advantage. A country without internationally competitive products inevitably finds itself at a disadvantage and tends to run a trade deficit.

To gain a strong position in trade negotiations, a country needs to have overwhelmingly competitive products and services. Even if South Korea tries to catch up with Japan in chipmaking materials right away, it is unlikely to gain a competitive edge, other than on price.

In contrast, China has been working to enhance its competitiveness in areas not dominated by Japan or other leading industrial nations. Many Chinese companies have succeeded in becoming world-beaters in areas such as mobile payments and artificial intelligence.

South Korea would probably be better off emulating China and concentrating on fostering new industries that will give it leverage at the negotiation table.

In July, Softbank CEO Masayoshi Son offered a piece of advice to South Korean President Moon Jae-in. When it comes to what South Korea should focus on, “the first is AI, the second is also AI and the third is AI as well,” Son was quoted as saying.

Even if South Korea must ensure domestic production of the 20 priority items, it should rethink whether to make all 100 products on its list at home.

South Korea’s dilemma also offers important lessons for Japan, which is at risk of becoming complacent about its technological leadership in materials production. Japan needs a reality check over its position in the design and development of next-generation semiconductors and AI products.

When the current nationalistic fervor subsides, both Japan and South Korea should reevaluate their economic and technological strategies.