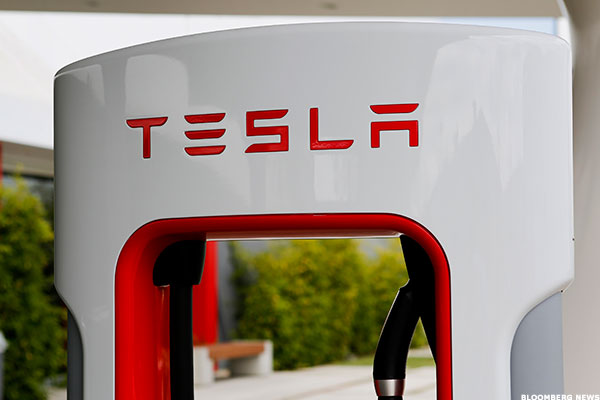 NEW YORK (TheStreet) — Tesla Motors
(TSLA – Get Report) edged down after J.P. Morgan cut its price target, despite a report Google
(GOOGL) was once interested in acquiring the electric car maker. Amazon.com
(AMZN – Get Report) soared after Wedbush raised its price target on the e-commerce giant. Microsoft
(MSFT) jumped ahead of the company’s third quarter earnings report, which is expected to yield higher revenue.

Meanwhile, an excerpt from an upcoming book on Tesla CEO and founder Elon Musk revealed Musk approached Google in 2013 to acquire his electric car company, according to a Bloomberg report. Fortunately for Tesla, which was reportedly on the brink of bankruptcy when Musk approached Google founder and CEO Larry Page about a buyout, the car maker was finally able to transform its pre-orders into actual sales. With a profitable quarter and stronger revenue, Musk never finalized the companies’ buyout negotiations, according to the report.

The e-commerce giant surged after Wedbush raised its price target to $395 from $330, according to a report in Investor’s Business Daily. In raising the target, the report noted that Wedbush expects Amazon to post “solid” first-quarter revenue when it releases its results on Thursday after the markets close.

Other areas that Wedbush commented on favorably included the company’s growing Amazon Web Services (AWS) cloud business and the beneficial impact to its gross margins, as a result. The AWS expansion has been costly, the report stated, but Wedbush believes it has reached a point to bring “significant leverage going forward,” the analyst said in the Investor’s Business Daily report.

The Redmond, Wash., giant advanced as it prepares to report its third-quarter results after the markets close on Thursday. According to a report in Selerity Global Insight, Microsoft is expected to post a 3.5% increase in third-quarter revenue to $21.1 billion over year-ago figures.

Microsoft was able to gain during the regular session, despite expectations it will post earnings of 51 cents a share. That consensus figure, according to Selerity, has dropped over the past three months from 69 cents a share.