By Jon Cooper | The Good Word

Thankfully, there was no literal use for the unit during the day.

Symbolically, the presence and placement of that G.B.I. vehicle might serve as a warning to future teams facing the Yellow Jackets. That warning reads “Beware of potential explosives.”

As a public service, we can identify those explosives as wideouts Malachi Carter, Ahmarean Brown and Adonicas Sanders. Last Saturday against North Carolina, redshirt freshman quarterback James Graham served as the pyrotechnician that sets them off.

Together, Carter (a sophomore) and Brown (a true freshman) went into last Saturday’s game with a total of eight starts (four apiece, all this season) while Sanders (a sophomore) and Graham made their first starts. Against UNC, the young trio of receivers combined for seven of Georgia Tech’s 11 receptions and accounted for 144 of Graham’s 171 passing yards and both of his touchdown passes, while averaging 20.6 yards per catch.

The trio keyed a second-half explosion by the Jackets. The Yellow Jackets racked up 229 yards and scored three touchdowns after the break — Carter, Brown and Sanders (below) accounted for 146 of the yards and two of the scores. 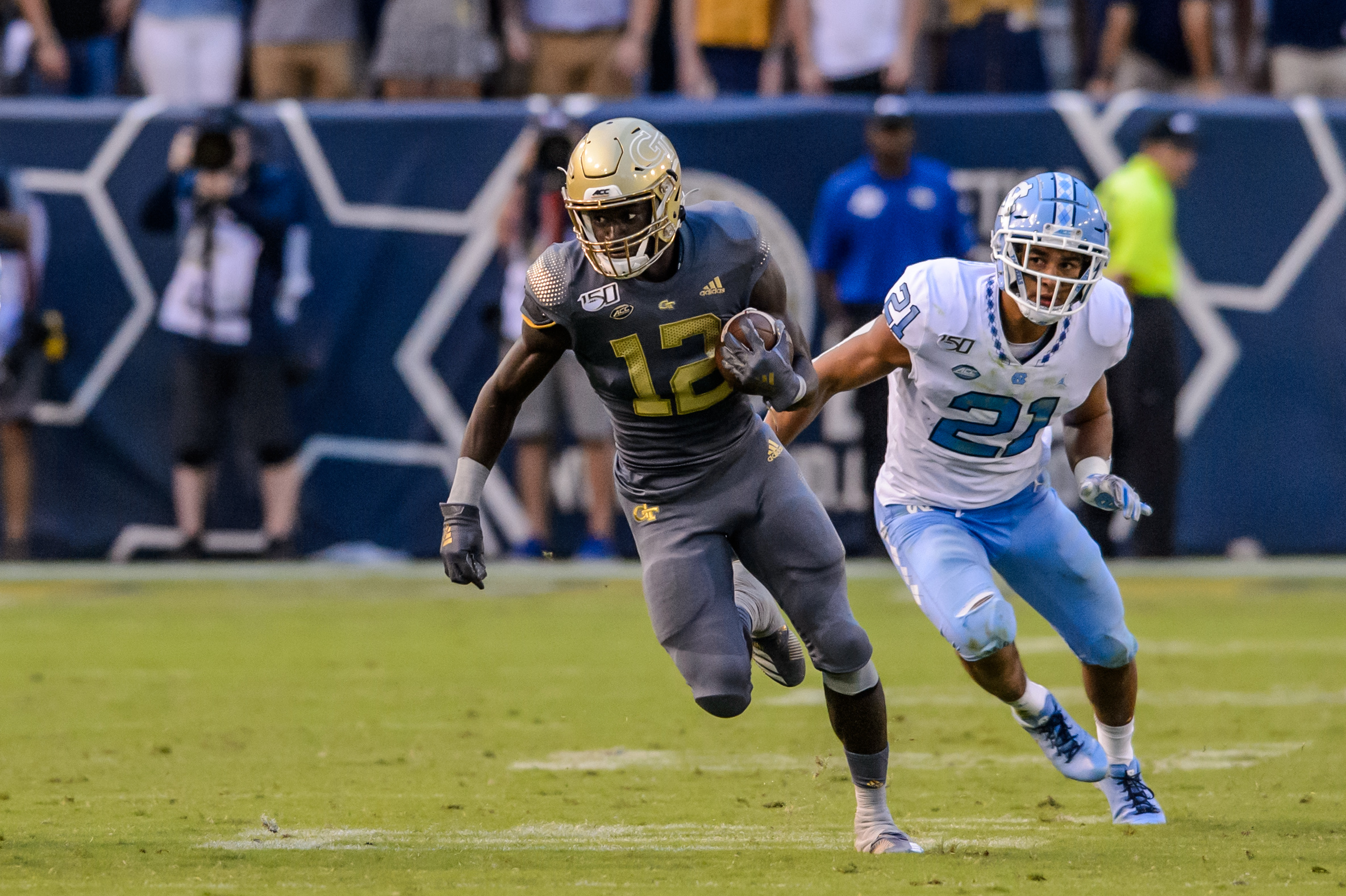 “(We) started to find a little bit of rhythm, had some explosive plays,” said head coach Geoff Collins. “We made it a really good game.”

As Georgia Tech heads out on the road this Saturday to visit Duke, its third road game of the season and the first of back-to-back ACC road tilts — the Jackets head to Miami next weekend — the receiving corps is growing up and blowing up.

They had to grow up quickly and unexpectedly after the unit suffered the devastating loss of senior Jalen Camp for the season. Camp not only was the senior leader, but also a bigtime target (he had seven catches for 134 yards in Tech’s first four games). But while the loss hit hard, it also strengthened the entire offense’s resolve and tightened its bond.

“It was a big loss to the receiving corps and we knew a couple of guys were going to have to step up,” said Graham. “We’re sad that Jalen’s gone, but I know he’ll be back next year stronger, so we’re just going to ride it out.”

“It’s definitely horrible that he can’t play. I know he’ll be back,” said Carter. “It doesn’t really do anything except make us want to play harder, especially as a receiving corps. Jalen’s someone that you definitely want on the field but with him not on the field, it doesn’t put any pressure on us. But it definitely puts fire in us to go out there and make plays for him.”

Carter, Brown and Sanders certainly did that against the Tar Heels.

Carter had three second-half receptions — giving him a team-leading 11 for the season — and pulled in his first touchdown catch of the campaign, a 28-yard connection in the third quarter. Brown, a speedster, made one catch for 32 yards and his also scored his second TD of the year. Sanders, making his first career start, also had three catches for a team-high 67 yards.

Graham loves the wealth of riches he has at receiver.

“It’s exciting having guys like Malachi, ‘AB,’ Adonicas, ‘TD’ [tight end Tyler Davis], even the backup tight ends came in a little bit and showed what they can do,” he said. “We’re going to get better every day at practice and the connections are going to get better and it’s just going to all fall together.”

It did on his 28-yard, third-quarter hook-up with Carter (below). 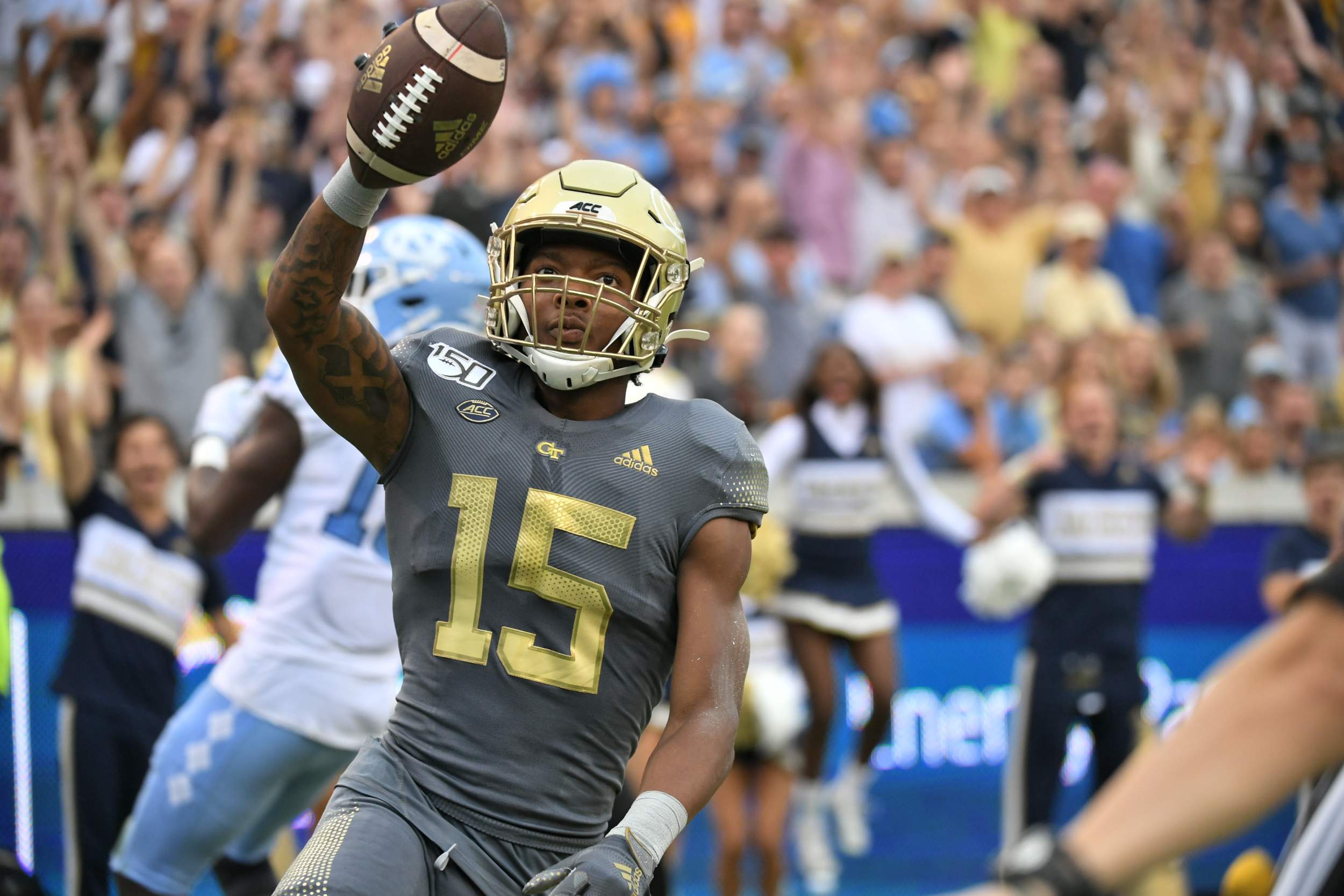 “It felt great [to catch the touchdown pass],” Carter said. “Me and my boy, James, just finally finding that connection, that chemistry we’re looking for. I felt like that was just the first sign of what we can do this season.”

If last Saturday’s second-half outburst was a sign of things to come for Georgia Tech’s passing game, it wouldn’t be a surprise to the unit that defends it every day in practice.

“When I see a long ball being caught downfield or any of the wide receivers catching I’m like, ‘That looks normal to me.’” said linebacker David Curry. “In practice, you see our wide receivers are very explosive and very good with their hands. It’s just them getting the repetitions and the offensive line and the blocking and everything happening for our quarterbacks to be able to give it to them. It’s really cool to see when it actually comes together in a game, as it did today, but it’s not a surprise because it happens all the time at practice.”

Offensive coordinator Dave Patenaude would like to see them continue doing what they’re doing — only start doing it a little earlier in the game. That almost happened against UNC, as Graham and Carter just missed on what would have been a touchdown on Tech’s fourth offensive play of the game.

“We talked about starting fast. In that first series, Malachi puts a kid to sleep on the outside on the double-cut and we just overthrew him. Had [Graham] hit that, he probably gets a little bit more momentum,” Patenaude said. “We definitely have to get off to a better start. We can’t always have to come from behind. We have to get out and establish ourselves, play with a lead and once you do that, you start to get in a little bit of a rhythm and feel good about yourself.”

Patenaude admitted that he ran plays last Saturday that he’d never run before in his career, with a goal of getting Graham going in his first-career start. He was pleased with how Graham got more comfortable as the game went on and how the offense finished, although he doesn’t expect them to be satisfied.

“We played better in the second half, we played better in the fourth quarter. That does not assure you that you’re going to go to Duke and do the same thing, but it’s something to build on. It’s something to have your confidence with,” Patenaude said. “We had 22 points in a quarter and a little bit more. If you continue to do that over four quarters, then we’re going to put ourselves in games where we need to be. In this conference, there are some really good offenses, so you’re going to have to put points on the board. You’re going to have to be efficient in what you’re doing. If we keep building on those things, we’ll be taking steps in the right direction.”

The Jackets are going to continue to spread the ball, as 13 different Jackets have caught a pass this season. Running backs Jordan Mason and Jerry Howard are prime targets, as is Davis, who caught a pass and a converted a two-point conversion against UNC. In holding true to Collins’ edict of being creative, converted DB Jair Hawkins-Anderson and QB Tobias Oliver have also been targeted.

Being creative and spreading the ball around will be paramount against the Blue Devils, whose 213.4 passing yards allowed per game rank favorably on a national level. But the Jackets believe they lit the offensive fuse following last Saturday’s fourth-quarter surge.

“We made plays,” said Patenaude. “We threw one out and Adonicas basically caught a little five-yard rollover and made three guys miss and went down the sideline. That was an explosive play. We hit a few explosives in that period, where we moved the field fairly quickly. J.P. [Mason] had a really long run. If you can maximize your explosives and minimize the turnovers, you’re going to be a much more efficient and explosive offense.”

Football Battles, But Falls at Duke