By Matt Winkeljohn | The Good Word

For all the good basketball that you might think will come out of the trip by Georgia Tech’s men’s team to Spain, where the men will play four games against club teams, the Yellow Jackets seem to believe that the greatest benefit will come from their tourism in Spain.

Or to be specific, the sheer time they will spend with each other will be best.

First instinct would probably be to think that taking advantage of NCAA regulations that allow teams to make an international trip once every fourth summer would best help the X’s and O’s. Those teams are allowed 10 full practices beforehand, after all, rather than having to wait until October to crank everything up at full speed.

It’s a head start of sorts as Pastner said Tuesday, “The plan is to play in the NCAA tournament this year.”

Yet as the Jackets play two games in Barcelona, where they arrived last night, and two in Madrid against Spanish Basketball Federation club teams, the student-athletes said that the best part about this trip is that they’re going to learn more about each other rather than about diving deep into plays and strategies.

“I think it’s going to be a wonderful opportunity for the guys, not only to see where we are during the summer but really get a chance to bond and come together as a team,” said senior center James Banks III.

Tech left Atlanta Thursday afternoon with absolutely no background about their opponents, other than they’ll be Spanish club teams, and schemes figure to be simple from the first game to the last.

“We don’t know anything about the opponents, and we’ll just show up and play,” the coach said. Tuesday. “No special scouting reports or anything. We’re looking forward to getting some guys on the floor.”

Pastner said he’ll hand out playing time liberally, and 10 of 12 scholarship players will see extensive action. Rising junior Moses Wright, the forward from Raleigh, is expected to be held out as his sprained ankle mends, and David Didenko, the junior college transfer, is not making the trip because of “immigration issues,” Pastner said. 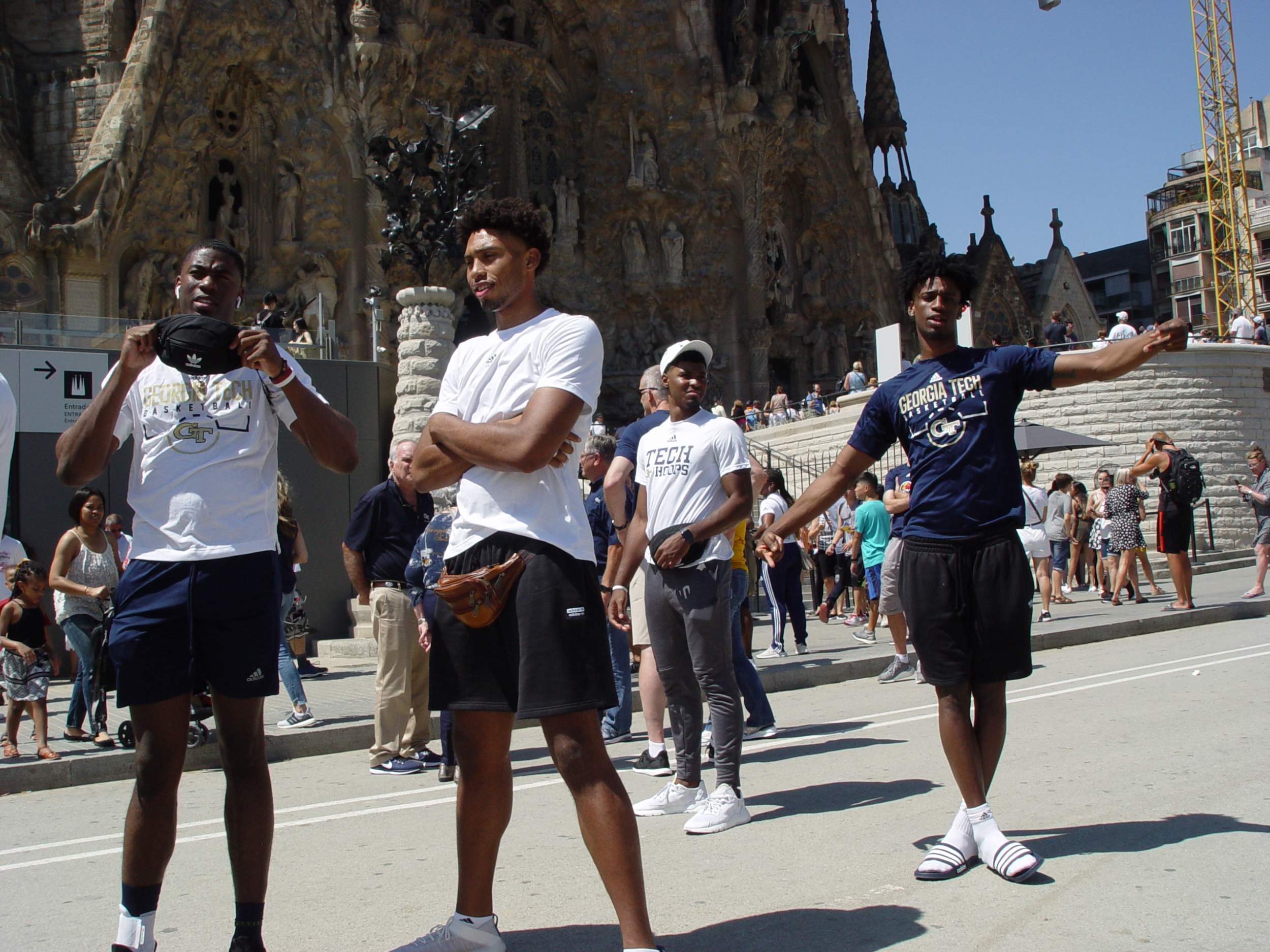 Returning student-athletes Banks, Jose Alvarado, Michael Devoe, Shembari Phillips, Evan Cole, Khalid More and Kristian Sjolund will all play two games in Barcelona, where the Jackets are now, and then after a high-speed train trip, they will play two games in Madrid.

Freshman Asanti Price also will play, and so will transfers Jordan Usher and Bubba Parham.

Usher will be eligible to play in regular season games beginning in mid-December, one year after the junior from Wheeler High School transferred from USC. Parham, the former Brookwood High standout who recently transferred from Virginia Military Institute, must sit out the 2019-20 season unless he is granted immediate eligibility by the NCAA.

Both, however, are allowed to play in these exhibition games.

And around all the games, the Jackets will be tourists.

Not long after their flight landed, on Friday they visited the Basilica de la Sagrada Familia, a remarkably ornate Catholic cathedral that has been under construction for more than 100 years, and followed that with a 30-minute shootaround at the gym where the Jackets will play Saturday and Sunday. Team director of operations Tyler Benson also has arranged tours of the training grounds of FC Barcelona and Real Madrid, two of the most famous and valuable sports organizations in the world. They play soccer there.

While Pastner values the early practice time this trip has triggered, as that makes evaluating his roster easier than the standard NCAA-allowable summer setup where student-athletes are permitted eight hours per week of coach-supervised activities with none being in full-team settings, there’s more value derived from this journey.

“There’s benefit because we’re with each other earlier, and we also play four games,” Alvarado suggested. “I think so because if you see the championship teams that won, they’ve got a great bond, and they’re just so close with each other. They want to better each other, and that’s what we want to do.”

Tech will get work done in Spain. Although the Jackets will not go heavy on plays nor strategy, they will push. Pastner has said he wants the team to pick up the pace this season, and they’ll start in Spain.

“We get a chance to play faster,” the coach said. “I think Jose and Mike are really good, and if Bubba’s able to play we’ll be really good in the backcourt. I think Mike and Jose right now are playing at a very high level.” 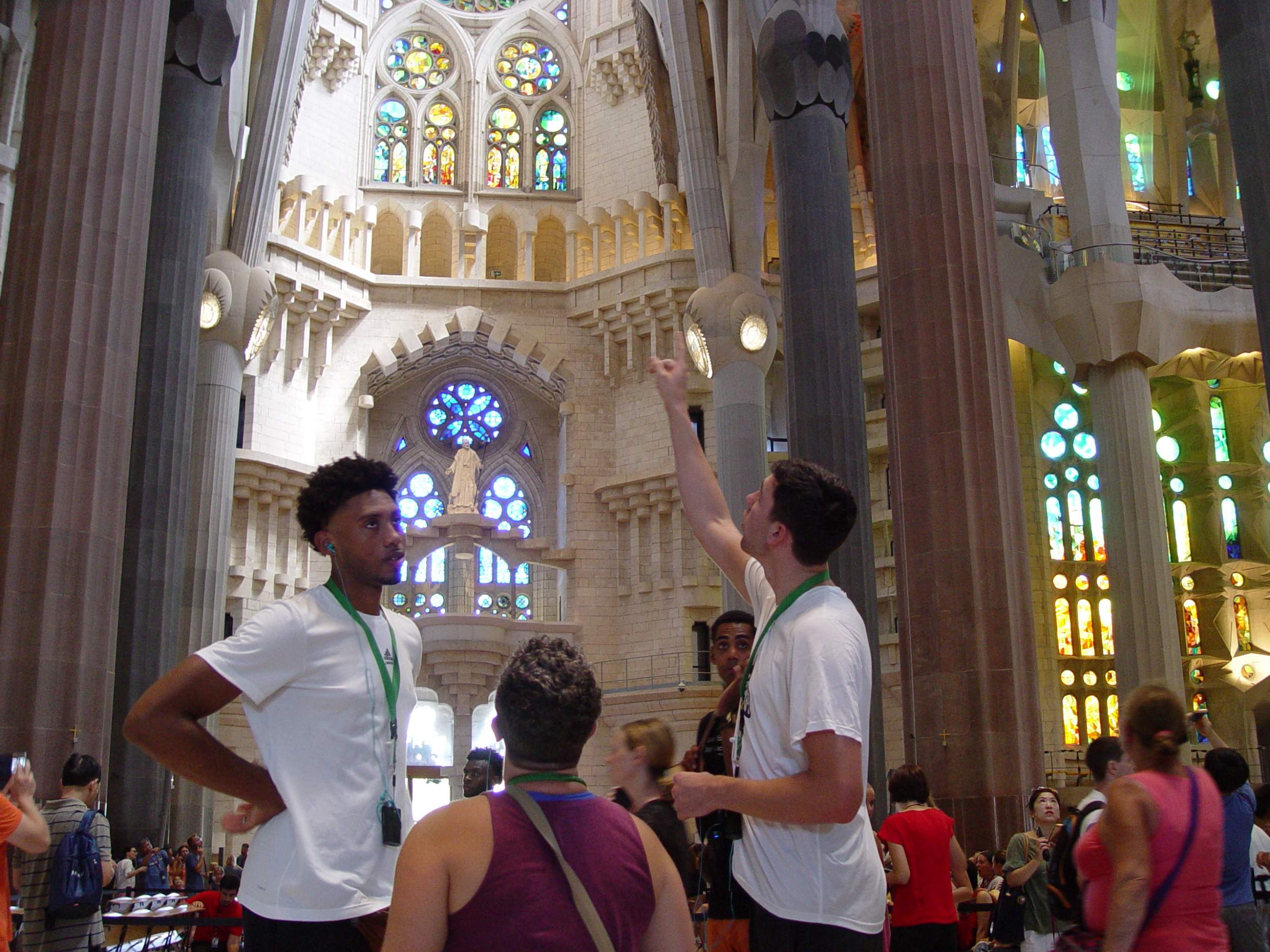 The Spain trip will be a chance for individual players to test the work that they’ve done in the offseason.

Banks has focused on developing his left hand and his explosive movements.

Alvarado, who is six feet tall, has worked especially hard on building strength through dietary changes and weight lifting.

Devoe has worked hard with assistant Anthony Wilkins on doing everything faster, and being more willing to shoot the ball.

“His thing is pace. My feet, how my feet are, just coming off ball screens, making good reads, just shooting the ball at a high level,” Devoe said.

This trip looks like it will be fun, as the Jackets look to build within and assemble all the work that players have done individually since last season ended at 14-18.

“The leap from our last game last year to any time this summer in practice is just tremendous. I can’t stress that enough. Guys have really been working hard,” Banks said. “Guys have been in the on their own, shooting a lot of shots, working on their handles . . . you can see it. It’s tangible.

“For me personally, I think this trip overseas is really just a bonding time for us as players. We’re going to get to see where we are, but honestly it’s just us coming together. I just think this trip is really going to build us a bond.”

The Jackets will not look to Alvarado to be a translator of language, even though he grew up in Brooklyn in a Hispanic household.

“Fun fact about me. My whole family is fluent, and I’m not,” he said. “If I’m getting yelled at, I got you, but I can’t have a fluent conversation with you.”