Louisiana Tech head football coach Skip Holtz details how much room the program has left for potential transfers in 2020 after National Signing Day.

RUSTON – Despite another successful year on the turf in 2019, one that ended with the only shutout during the bowl season – and it kept a Power Five in Miami scoreless in Shreveport at the Independence Bowl – it feels as though Louisiana Tech traipses into 2020 with few expectations.

The team is coming off the program’s first 10-win season since 1984 and in many cases, such a feat would breed optimism for the following spring. But Tech has plenty of question marks at key spots as it’ll take the field at Joe Aillet Stadium Friday afternoon at 4 p.m. for the first of 15 spring practices. Louisiana Tech will hold its annual spring football game Saturday, April 18 at noon at The Joe.

Let’s take a look those question marks and at five spring football story lines for the Bulldogs: 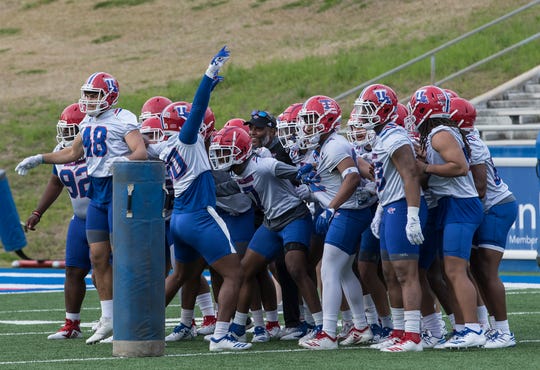 During his entire tenure in Ruston, head football coach Skip Holtz had not had a returning starting quarterback until J’Mar Smith filled that void two seasons ago. Now, the Louisiana Tech head honcho will navigate the process of what it’s like to replace a three-year starting signal caller as Smith wrapped up his collegiate with the 14-0 win over the Hurricanes last December. The Meridian, Mississippi, native ended his time at Tech with 9.523 passing yards, 51 touchdowns passes and 21 interceptions over three-plus years. And he saved his best overall statistical season for last, completing a career-high 64 percent of his throws along with his best touchdown-to-pick ratio. And he put those numbers up while missing two games due to suspension.

This spring will give us a glimpse into how valuable it was for backup quarterback Aaron Allen, who was a redshirt freshman in 2019, to start the two contests – big games might I add at Marshall and UAB – that Smith sat out. Despite Allen winning the primary backup role over Westin Elliott during last season and him having those two starts under his belt, expect the starting quarterback to be wide open beginning this spring between the two as well as grad transfer newcomer Luke Anthony. At Abilene Christian last year as a junior, Anthony threw for 2,525 yards while completing 63.5 percent of his passes with 17 scores. No way around it, all eyes will be on the quarterbacks in Ruston this spring.

Last year’s defensive coordinator Bob Diaco, now at the same position at Purdue, self-proclaimed that his defense based out of both of the 3-4 and 4-3. While that’s true, as the 2019 campaign progressed, Tech found itself with three down linemen and four athletic linebackers on the field more often than the other way around.

Enters new DC David Blackwell, who improved Old Dominion’s defense the last couple of seasons. And his unit utilizes four defensive linemen in its base form. For the second straight spring, Louisiana Tech defenders will be learning a new system, but it may not be as tough as Blackwell will be working with eight new starters at all three levels on that side of the ball. Getting 15 practices this spring for installation will help with that transition.

D-Line depth will be key with new position coach

With the shift in base formation, the depth up front will be huge for the Bulldogs. The defensive line is one of the thinnest positions on the team with only five defensive ends and five interior linemen on roster as Tech opens spring drills. Redshirt junior rush end Milton Williams leads the returners across the defensive front after collecting 59 tackles, including nine tackles for loss in his first season in a starting role last year. A good thing could be redshirt senior Willie Baker moving back to his natural rush end position after splitting time with his hand in the ground as well as covering backs as a hybrid linebacker.

The rest of the group features just two other players older than a sophomore in redshirt junior Tristan Allen, who saw action in 12 games last year, and redshirt senior Eric Kendzior, who didn’t play in 2019 due to injury. Louisiana Tech’s youthful defensive line will also welcome in a new coach for the first time in a while after the retirement of Rick Petri. Holtz hired Anthony Camp, who coached at nearby Louisiana-Monroe the last two seasons, back in January and he’ll be charged with finding and developing contributors among guys like Deshon Hall, Steven Shaw, Mykol Clark, guys who have been in the program for at least a year, and new enrollees like West Monroe native Dontrell Cobbs and Ben Bell.

Bulldogs’ Iron Man Ethan Reed, who was the FBS active leader in consecutive starts, is gone. Drew Kirkpatrick and Gewhite Stallworth have also graduated, leaving three big holes to fill across the offensive line. Kody Russey, entering his senior season, will be the glue and the key cog up front offensively for Tech, while Willie Allen was a key piece at left tackle in 2019 and he’ll be back.

The amount of experience and talent Louisiana Tech’s secondary lost from last season’s group makes the unit almost a total rebuild. Two-time All-American Amik Robetson decided to leave early for the NFL Draft. Senior safety L’Jarius Sneed, who put together an impressive NFL Combine workout earlier this month, has graduated. No more Darryl Lewis or Michael Sam in the defensive backfield. All together, that’s close to 125 combined career starts and 235 total tackles, 12 of the defense’s 17 interceptions that walked out the door from last season’s production.

Redshirt sophomore safety Bee Jay Williams is the lone returner with starting experience that will be back. Both cornerback positions will be wide open, but look for early enrollee JUCO guys Jemaurian Jones, who signed with Southern Miss out of high school, and Dallas Taylor-Cortez to make some noise in those competitions. At the other safety spot, redshirt senior Jaiden Cole has filled a backup role the last two years and this spring could be his opportunity to nail down the starting job.