Google Glass may have been an expensive flop, but Mark Zuckerberg still believes in the potential of such technology.

During a ‘Town Hall Q&A session’, the Facebook founder said that within the next 12 years virtual and augmented reality headsets will be so small, people will wear them like normal glasses.

And he envisions a world where wearers will be able to beam photos to other people’s headsets simply by snapping their fingers. 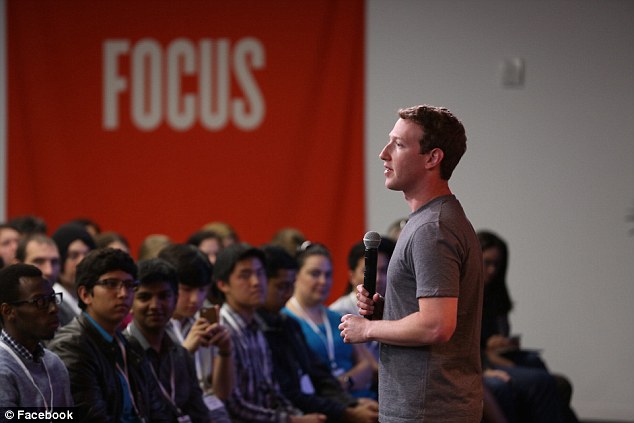 During a Q&A session, Facebook’s Mark Zuckerberg (pictured) said that within the next 12 years virtual and augmented reality headsets will be so small that people will wear them like normal glasses. And he envisions a world where wearers will be able to beam photos to other headsets simply by snapping their fingers

The comments were made in response to a question was posed by an attendee called Ray from New York.

He asked: ‘What will Oculus devices be used for in the future by Facebook, and what can we expect from Facebook using these devices?’

The 31-year-old Facebook owner replied: ‘Oculus and virtual reality (VR) in general are areas that I’m really excited about.

‘Every 10 or 15 years a completely new computing platform comes along, so in the 1990s we had these desktop computers, and now we have these much more intuitive devices with phones and tablets.

Since being discontinued in January, speculation has been rife about what Google plans to do with its Glass technology.

And now new job listings suggest we may find out sooner rather than later.

Google is hiring more than 20 people to work on the project, from engineers to recruiters and designers.

And one listing suggests the firm is expanding beyond headsets into ‘smart eyewear and other related products.’

At the time the firm stopped selling the headset, it said it was time for a ‘strategy reset’ and that Glass ‘doesn’t end here,’

‘And I think VR and augmented reality (AR) are going to be the next leap beyond this.’

He said that with current VR devices people can put on a headset and it feels like they’re immersed in a new world.

But in the future, this form factor will keep on getting ‘smaller and smaller’ to the point where ‘it stops being big goggles and a headset, and instead looks like normal glasses.’

This is similar to what Google Glass was trying to achieve with its own headset, which it discontinued in January.

‘You’ll be able to use it without being tied to a computer, move around with it and use it anywhere,’ Mr Zuckerberg continued.

‘Today, if I want to show my friends a photo I’ll pull out my phone and show them the photo.

‘In the future you’ll just be able to snap your fingers and instantiate a photo album, and people will be able to see it through their glasses. I think that’s pretty amazing.’

According to Mr Zuckerberg, this is going to take up to 12 years to build out and create something that really works, and is cheap enough for everyone to use – and that is what Facebook is trying to do with Oculus. 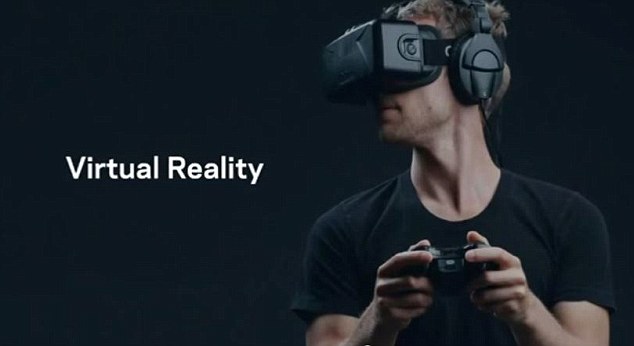 Mr Zuckerberg said that with current VR devices (example pictured) people can put on a headset and it feels like they’re immersed in a new world. But in the future, this form factor will keep on getting ‘smaller and smaller’ to the point where ‘it stops being big goggles and a headset, and instead looks like normal glasses’ 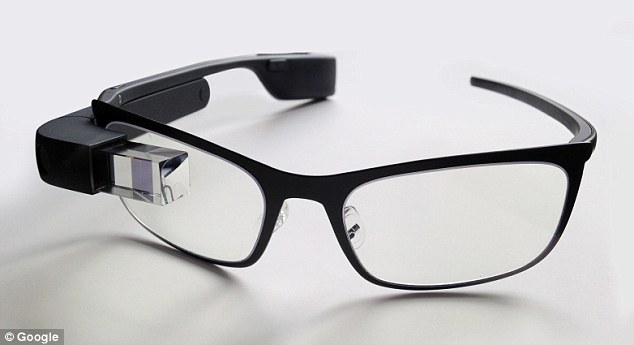 This is similar to what Google Glass was trying to achieve with its headset (pictured), which it discontinued in January. New job listings suggest Google is revamping this project, however, and is hiring more than 20 people to work on the technology, from engineers to recruiters and designers

And among the questions about how content is filtered on News Feeds and the future of Pages, Mr Zuckerberg was also asked what he will wear in the future when he can no longer wear T-shirts and hoodies.

To which he replied: ‘I’ll probably find something equally as unfashionable, like a unitard or a onesie.’

Since HG Well’s 1897 novel The Invisible Man, the world of science fiction has been fascinated with the idea of disappearing from view.

And while experts attempt to invent invisibility cloaks, a team of researchers from the University of Sweden recently discovered it’s possible to trick a person into thinking they’re invisible simply by using a virtual reality headset.

The study also found that creating an illusion of invisibility can help people deal with socially stressful situations more easily.

Mr Abrash said The Matrix provides the best sense of what virtual reality could someday be like and he used optical tricks to prove that we are merely ‘inference machines’ and the world we see now is already an illusion.

In particular, he quoted a speech made by character Morpheus.

Summing up what’s truly unique about VR, the character, played by Laurence Fishburne, said: ‘What is real? How do you define real?

‘Unlike Morpheus, I’m not offering you a choice,’ said Mr Abrash. ‘No matter what choice you pick, we’re all headed down the rabbit hole together.’ 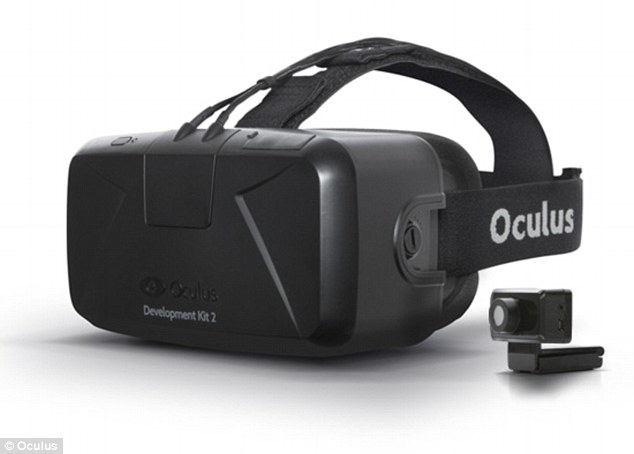 Mark Zuckerberg also confirmed that a consumer version of Oculus Rift will go on sale in the first quarter of next year. The second-generation developer kit of the headset is pictured 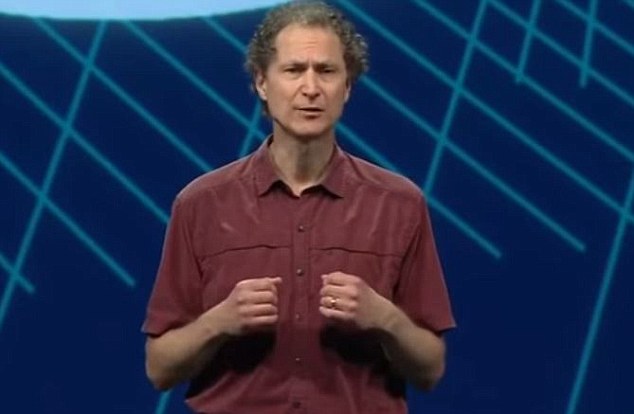 This refers to the pills offered to Neo in The Matrix. If he takes the blue pill the story ends and he is told he will wake up in his bed and ‘believe whatever he wants to believe’.

Taking the red pill means he stays in The Matrix.

Mr Abrash continued that most people focus on the ‘virtual’ in virtual reality, but we should be focusing on the latter.

‘Morpheus made two critical points with his sentence: our conscious minds never actually interact with the real world and that we interact with sensors on our eyes, ears and tongue, and throughout our body. This is just a very small subset of the real world.’ 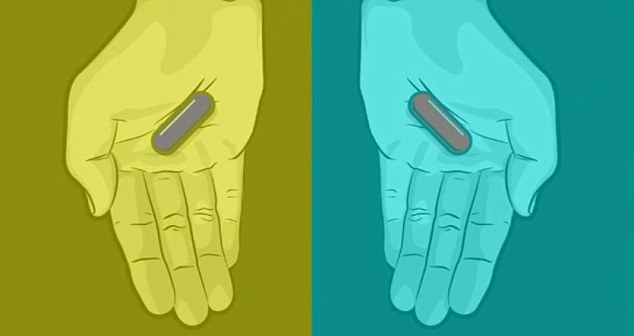 ‘Unlike Morpheus, I’m not offering you a choice. No matter what choice you pick, we’re all headed down the rabbit hole together,’ Mr Abrash said. This made references to pills offered to Neo in The Matrix. He used the illusion (pictured) to show that our brain already infers what’s real based on the limited data it receives

The red and blue colours in the previous image are simply what a viewer’s brains perceive, based on the rest of the information around them. The pills are actually grey (pictured). And Mr Abrash said that even when a person knows the pills are grey, they still see them as red or blue

He gave the example of vision. Humans only have three colour sensors, we can’t see infrared or ultraviolet and we have a blind spot in each eye.

‘Our visual data is actually astonishingly sparse and even if we were able to accurately record and process every photon that reaches our eyes, we’d still have too little data to be able to reconstruct the world accurately,’ he said.

‘Our visual system takes its best guess and sends that to the conscious mind.

‘The way that the brain compensates for the limited data it receives is by maintaining a model of the real world that it constantly updates as new data comes in.

‘And it is that model, not the real world, that you experience and trust implicitly. We are inference machines, not objective observers.

‘The fact that reality is whatever your mind infers from the nerve impulses sent to sensors, based on the model of the world, is at the heart of what makes VR different and more powerful than anything that has ever come before.’

To demonstrate this, Mr Abrash showed a red and blue pill on hands that were shown on a yellow background.

He used this to reveal that the colours of the pills are the same shade of grey, and the red and blue colours that people see are simply what their brains perceive, based on the rest of the information around them.

And even when a person knows that the pills are grey, they still see them as red or blue.