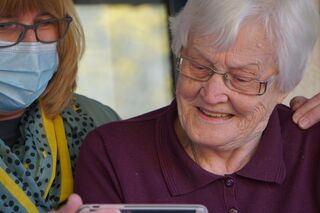 A new paper published in Social Psychology and Personality Science suggests that the internet, when used properly, can be a helpful tool to keep people mentally sharp as they age.

“It’s interesting that researchers often think about internet use in old age as something healthy, but consider internet use among teenagers as a potential harm,” wrote Ted Schwaba, a post-doctoral researcher at the University of Texas Austin and lead author of the research. “People of any age can use the internet to learn, connect, and grow.”

To examine the effects of internet use on cognitive engagement among older adults, the researchers turned to the Longitudinal Internet Study for the Social Sciences (LISS)—an annual survey measuring various behaviors and personality traits in a nationally representative sample of Dutch adults. The researchers looked specifically at respondents who were over the age of 65 and who had completed the survey for six consecutive years, between 2012 and 2017.

They tested whether respondents who showed more frequent internet use, as measured by the time they spent searching for information and using email, consuming media, and using social applications, reported higher levels of cognitive engagement. Cognitive engagement was defined by the researchers as the degree to which people reported being open to new experiences and having a strong “need for cognition.”

They found that older adults who were more cognitively engaged used the internet more frequently, especially for search and email. They also found that respondents who increased their use of online media over the six-year measurement period showed smaller declines in their desire to seek out new ideas and information than their peers.

“We believe these findings suggest that online media-related activities, like reading the news online, might be good targets for future intervention studies that seek to help older adults stay cognitively engaged,” according to Schwaba.

The researchers also reported that older adults who showed high cognitive engagement were more likely to watch online TV such as YouTube and less likely to watch traditional offline TV.

“It’s not just watching a screen that is psychologically important, it’s what kind of screen,” wrote Schwaba.

They also found that cognitively disengaged older adults were wary of using the internet altogether.

“It makes sense that a curious, intellectual person would be especially attracted to use the internet to learn more about the world,” concluded Schwaba.

The authors hope their work inspires researchers and clinicians to take a holistic view of intelligence when considering ways to improve intelligence and stave off cognitive decline.

“Of course, cognitive ability is important for healthy aging, but so is helping people lead cognitively engaged, enriching, curiosity-filled lives,” wrote Schwaba. “I think that intervention researchers who measure these ‘softer’ forms of intellect will be surprised to see both how important they are and, hopefully, how they are a bit more amenable to intervention than raw intellectual ability.”