You are here: Home / WEB - BLOG / Dallas Museum of Art removes object that website contends is a ‘deity stolen from a temple in Nepal’ – The Dallas Morning News

The website is hyperallergic.com, whose Jan. 24 headline caught our eye: “Stolen Deities Resurface in a Dallas Museum.” The story goes on to note that “a deity stolen from a temple in Nepal ended up in the Dallas Museum of Art.”

So, we checked with the DMA, which issued this response:

“As soon as the DMA was made aware of the recent information with respect to the stele [a standing block monument], the Museum began an internal review and research of the object, which was on loan to the DMA from a private collection. The DMA has removed the stele from display while we work with the lender to gather additional information and determine an appropriate and responsible course of action.”

In its story, hyperallergic.com reports that artist Joy Lynn Davis “recognized the blurry image that popped up when she ran a Google image search for sculpture from Nepal. It was a statue of two deities joined together: Narayana [an avatar of Vishnu] and his consort Lakshmi. With one pectoral muscle and one breast, this Lakshmi-Narayana statue is unmistakable.”

The hyperallergic.com article notes that Davis knew the statue had been stolen from a temple in Katmandu in 1984 and added: “Now, a blogger’s shaky snapshots from an exhibition opening revealed where it had ended up: the Dallas Museum of Art.”

Hyperallergic.com notes that the statue “was purchased at Sotheby’s by David T. Owsley, a prominent collector of antiquities and long-time patron of the [Dallas Museum of Art]. The sculpture first appeared in public in late 1993, during a special exhibition put on to display Owsley’s collections (East Meets West: Sculpture from the David T. Owsley Collection).”

There is a page devoted to Owsley on the DMA website, which describes him as follows:

“David Owsley’s life has been one of committed passion for the arts. His keen intelligence, fine eye, curatorial connoisseurship, and fascination with acquiring art has not only been a personal pleasure for him but also a major opportunity for the Dallas Museum of Art to grow in an area few people would have imagined ten or twelve years ago. Like all great collectors, Owsley sees art collecting as an investment in the future. Generations of Dallasites will reap the rewards of his generosity.”

On Wednesday, the DMA responded to our request for additional information by noting: “The Stele of Lakshmi-Narayana was on loan as an intended gift of David T. Owsley.”

And then we reached out to Owsley for comment. The woman who answered the phone at his residence conferred with him briefly and said, “Mr. Owsley would like to tell you that whatever he bought, he bought in good faith and for the education of the public.”

We also reached out to Sotheby’s for comment but have yet to hear back.

A photograph of the item in question appears on page 95 of the brochure mentioned on the DMA website. 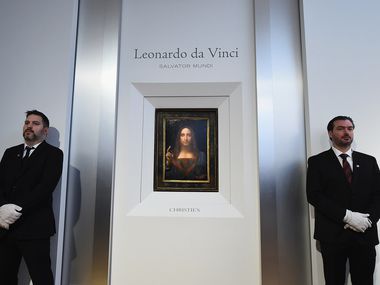 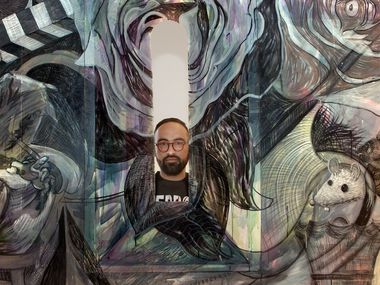